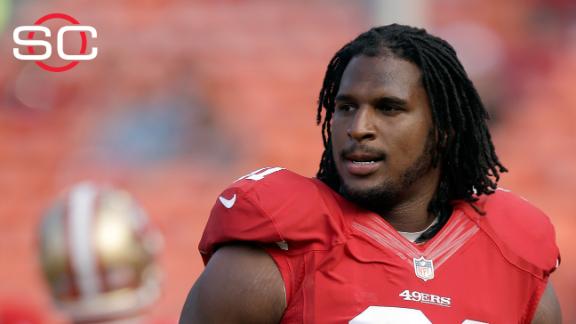 It marked McDonald's second arrest in less than 72 hours. On Monday, authorities booked McDonald on suspicion of domestic violence and child endangerment as a result of an early-morning altercation with his former fiancee, who also is the mother of his child.

Several hours after the alleged incident, the police located McDonald at the home of former teammate Justin Smith, where they placed the veteran defender under arrest.

The restraining order McDonald is accused of violating Wednesday was issued as a result of Monday's case.

He posted $5,000 bail and was released from custody late Wednesday night, according to multiple media reports.

According to the Santa Clara Police Department, detectives learned around 2:52 p.m. that McDonald had violated the restraining order by being at a Santa Clara residence.

They later found McDonald at a local restaurant, where he was arrested without incident.

McDonald's attorney, Steve Defilippis, told ESPN's Josina Anderson on Wednesday night that McDonald was never served with a restraining order, although he was told to stay away from his former fiancee.

Defilippis said that before going to the house, McDonald was told the woman would not be there.

"Today my investigator contacted her and confirmed that she was in Santa Cruz," Defilippis said, "and Ray went over to the apartment to meet the investigator to let him in so that he could get photographs of this allegedly broken door, and lo and behold the cops show up and arrest him."

Defilippis insisted McDonald was at the residence to meet a private investigator "for a legitimate purpose and the police show up and arrest him."

"The overriding emotion for me was sadness," McCaskey said of hearing of McDonald's Monday arrest. "Sadness for the child, for the child's mother and for the entire situation. Domestic violence is a vexing social problem.

"The NFL has had some high-profile cases including this one, and the NFL because it's a leader in a society is called upon to take action, which we are doing. We're not going to do it by ourselves, but I think we have an opportunity to make an impact."

This is McDonald's fourth brush with the law since August. The defensive end was accused in August of domestic violence by the ex-fiancee, but the district attorney in that case decided to not press charges.

The NFL later announced that McDonald would not be subject to penalty stemming from that incident under the league's personal conduct policy.

In December, McDonald was accused of sexual assault by a different woman. That case remains open.