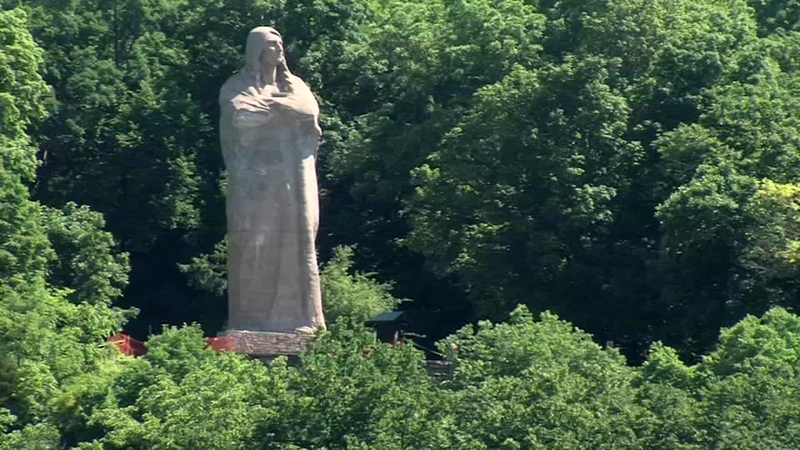 OREGON, Ill. (WLS) -- For more than a century, visitors have traveled from across the world to see an Illinois statue named "The Eternal Indian" that overlooks the Rock River.

The statue just outside Oregon, Illinois, is finally about to enjoy a re-birth.

At 48-feet tall, it's one of the largest concrete monolith statues in the world.

Famed Chicago artist Lorado Taft designed it, and though he named it "The Eternal Indian" in 1911, the statue is more commonly known as Blackhawk - chief of the Sauk and Fox who once lived in this area 100 miles west of Chicago.

"So if you're younger than 108 years old and you've driven by him or visited Lowden Park, you're acquainted with Blackhawk. He has a mystique about him that captures people's hearts," said Jan Stilson, of the Blackhawk Art, Restoration and Development Committee.

But 108 years of freeze and thaw has left Blackhawk wounded and weary. Money for restoration was promised and not delivered. False starts fueled aggravation.

The statue was kept under a tarp for three years, and it was just removed last year.

Now there is a new tarp and scaffolding, but this time, Blackhawk's wounds are being healed.

While cameras are not permitted inside the work area, stills show some of the delicate process. The statues arms had to be fully replaced. The head needed significant repair. Much of the decayed exterior concrete skin has been chipped away and replaced with a new, less permeable concrete mix.

Stainless steel pins serve as markers for the statue's skin, and the new mix is shaped by hand with trowels. The target date for completion is the end of December.

When the state last year finally made good on a $350,000 commitment to fund the statue's restoration, that opened the door for more private contributions.

"It's unbelievable. We still get checks everyday at the ICF for people to continue funding for restoration after the project is complete," said Crystal Curfman, executive director of the Illinois Conservation Foundation.