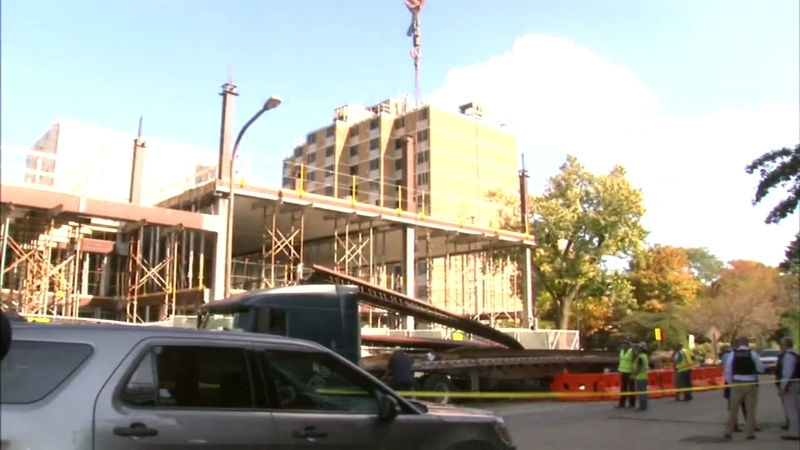 Construction worker killed in Evanston after steel beam fell on him

EVANSTON, Ill. (WLS) -- A construction worker was killed and another was critically injured after a steel beam fell 30 feet and hit them Tuesday morning in north suburban Evanston.

The incident occurred at about 8:30 a.m. where a nine-story apartment building is being built at 811 Emerson Street in downtown Evanston. A crane was offloading steel beams from a truck when the rigging failed and one of the beams dropped, Evanston Police spokesman Perry Polinski said.

The steel beam fell on two men, ages 55 and 27, according to the Evanston Fire Department.

The 55-year-old man was immediately rushed to Evanston Hospital, where he was pronounced dead, Polinski said. He was identified to the Cook County Medical Examiner's Office as David G. Bialas, of the 900-block of State Route 251 in Compton, Ill., which is about 85 miles west of Chicago.

The 27-year-old man, who is from west suburban Woodridge, was pinned under the beam. He was extricated and transported in critical condition to Evanston Hospital, where he underwent surgery. He was in serious, but stable condition Tuesday afternoon.

A crane operator was not injured, but was so shaken that he needed help getting down.

It was immediately unclear what caused the beam to fall, however it appears that the crane's rigging may have failed as the beams were being unloaded.

Investigators from the Occupational Safety and Health Administration were at the scene.

A spokesman for the company declined to comment on the investigation Tuesday afternoon.

Emerson was closed between Sherman and Maple avenues for the investigation.

The 800 block of Emerson St. (Sherman to Benson) remains closed to traffic due to a construction site accident. The block will likely remain closed until noon tomorrow (10/10). Please use an alternate route.