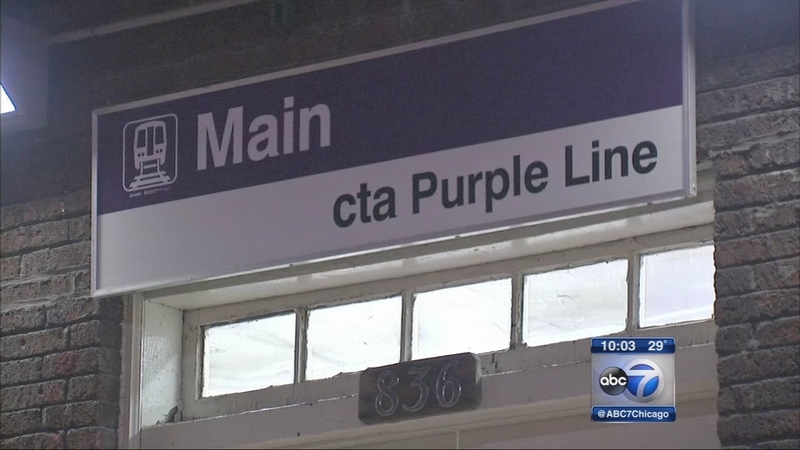 EVANSTON, Ill. (WLS) -- Police are stepping up patrols at CTA train stops in north suburban Evanston. The officers are stationed at eight locations from the Central stop to Howard along the Purple Line.

Police say it's mainly in response to a robbery that took place a couple weekends ago near the Main Street "L" stop, but the move also comes as a nearby store prepares to sell a controversial magazine.

Word of the heightened police presence drew a positive response from CTA riders on Wednesday.

"I do think the CTA can be a little unnerving at night if you're all by yourself, the only one on the car, so yes, I think it's a good thing that the police are involved," said Katelyn McAuliffe, a CTA rider.

Police say the stepped-up foot and vehicle patrols began late last week at all eight Evanston CTA stations, including the stop at Main and Chicago where a woman was robbed of her smartphone on Jan. 10, a block from the station after she left the Purple Line. Police say she was robbed by two females in their mid-to-late teens.

"We have information that they've still been spotted near the CTA, in that area, so we've been trying to track them down," said Evanston Police Cmdr. Joe Dugan.

"I've definitely been more conscious on the train, putting my iPhone away when we get to a stop. Don't want people running off with it," said Stephanie Mitchell, a CTA rider.

Adding to police concerns is the upcoming sale of the controversial French magazine at the center of recent terror attacks in Paris. Though Charlie Hebdo hasn't been sold in the U.S. in years, the Chicago-Main Newsstand - half a block from the Main Purple Line stop - is one of a small number of vendors preparing to receive that high-demand issue.

"We get calls pretty much all day from people inquiring about it. People have been calling from other parts of the country," said Eric Ismond, Chicago-Main Newsstand manager.

But despite the increased police patrols, Dugan said: "There is no knowledge that I'm aware of that has been brought to our attention of any credible or imminent threats."

ABC7's Eric Horng said: "Have you received any calls from people who are not happy that you're going to be carrying the magazine?"

"No, we've had no negative feedback at all," Ismond said.

Chicago-Main Newsstand is selling only that one issue of Charlie Hebdo, the first after the attacks, and it could be available Friday. Future issues are not yet being made available to U.S. vendors.

Evanston Police say they've been in contact with Homeland Security and the State Department, as they always are, but say they've received no directive regarding vendors that sell Charlie Hebdo magazine.