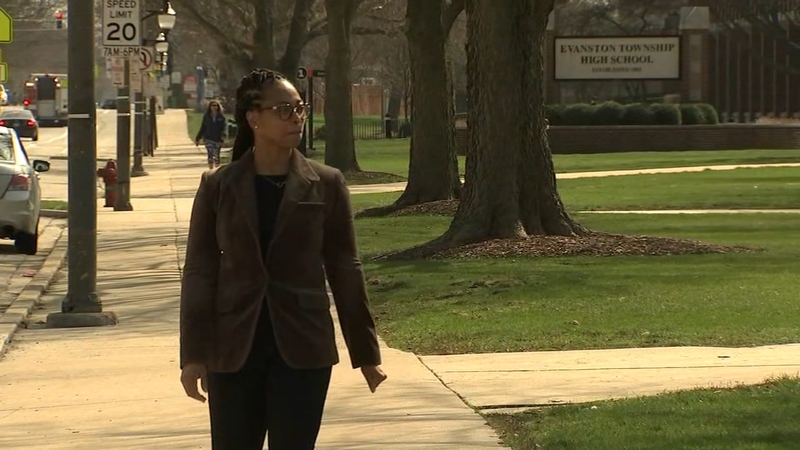 EVANSTON, Ill. (WLS) -- A student's mother has filed a lawsuit against Evanston Township High School alleging her daughter and other students were sexually abused by two security guards.

An amended lawsuit filed Wednesday provides new allegations around the claims, described what Sophia Sterling called a "culture of inappropriate sexual conduct," and accusing the high school of not doing enough to protect its students.

Sterling filed the initial federal lawsuit against Evanston Township High School in 2019. She said she's speaking out now because the school still hasn't given her any explanation on how the alleged abuse could have happened, and what they're doing to protect students moving forward.

Sterling said sending her daughter to the school was a no-brainer.

"I'm an Evanston alum," she said. "There are certain procedures and things like sports and clubs that are great for the development of children. We're a member of the community and so Evanston was the next step in their education."

She said her daughter was part of a special needs program where she thought she'd be protected. But in 2019, she said she received a disturbing phone call from the school.

"School officials believe there was inappropriate contact between my child and a security guard here, and I was completely unaware," Sterling recalled. She said they have not reached out to her again.

Sterling said after speaking with several students and parents, she learned her daughter and other students had been sexually abused by two school security guards for years.

The federal lawsuit alleges that during her daughter's time at Evanston Township High School, two security guards used their position of authority and power to groom and sexually abuse students on and off campus.

The suit also claims that other staff and personnel knew about the abuse.

According to Sterling, her daughter's abuse started in 2015 and continued through 2019. She feels like she was the last to know.

"It is baffling to me because, while I can imagine why the girls wouldn't' come forth and share, I cannot understand why the adults wouldn't share, why they would continue to keep up this wall of secrecy," she said. "If you're here to keep them safe, how do you sleep at night knowing that this is going on?"

The suit states that the school fired both security guards during their respective tenures because of the abuse. One of them, Michael Haywood, recently pleaded guilty to felony aggravated criminal sexual abuse. Sterling's attorney said that case did not involve her daughter.

Sterling said to this day the school hasn't told her anything more about how this happened under her watch, and that her daughter still hasn't healed from the trauma.

"It's horrible. It's arguing, it's crying, it's fighting," she said. "It's manifesting itself in every negative form that you can imagine."

"My number one goal is to never have this happen again to another child, student, family or our community," Sterling added. "It's painful and it needs to stop."

The ABC7 I-Team reached out to the attorney for Evanston Township High School, who has not provided a comment yet at the time of this writing. We also reached out to the two security guards mentioned in the lawsuit and are still waiting to hear back