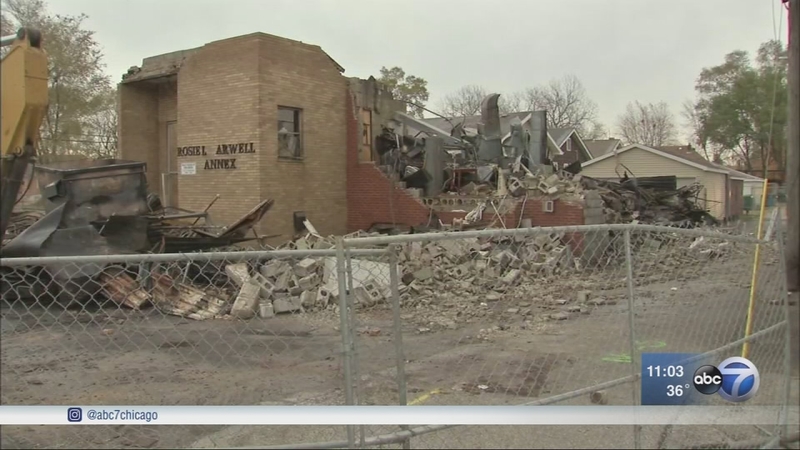 HAMMOND, Ind. (WLS) -- A deacon was critically injured in an explosion Monday leveled a church in Hammond, Ind.

The deacon, Craig Williams, had arrived at Bethel Church of God in Christ in the 800-block of Wilcox Street just before 5:20 p.m. to set up for a meeting. Williams smelled gas and checked a furnace room.

That's when the blast occurred, sending cinder blocks flying. Then the building burst into flames. Fire officials said the building's flat roof collapsed, making it harder to fight the fire.

Williams suffered burns to his hands and face, but when he was awake and talking to first responders as they rushed him to University of Chicago Hospital. He was then placed in the medically-induced coma. Hospital officials said Tuesday he was listed in critical condition.

"We're praying that he survives and will be OK. We're just going to keep him up in prayer," said Lester Stokes, a deacon who was notified of the blast Monday night.

Sierra Barnes, a longtime church member, was one of the first to see the damage in the daylight Tuesday. She remembered smelling gas earlier in the day Monday.

"I walk down here every morning. Monday morning as soon as I hit that street, I smelled gas all on the street that morning. I didn't know it was actually the annex of the church," Barnes said.

There is not much left of the church's fellowship hall and food pantry it housed. The food pantry serves hundreds of people each month. There were seven deep freezers full of food inside. Another shipment was due Tuesday. It is all gone.

Doris Barnes, another longtime church member, said she is most heartbroken for the food lost because of all the people that will go unfed.

"I didn't know the building was gone like that," Barnes said. "The pantry was full of food. It was ready. The people that come to visit the line is from the door to back here sometimes. They come at 4 or 5 in the morning and we don't open until 10."

The devastation could have been much worse. The meeting Williams was preparing for was scheduled less than two hours after the blast occurred. Many more people would have been inside the church.

"I was totally devastated at the scene of the building and the condition. I also thought about the sacrifice we've been making for the community," said Joseph Alford, Bethel's pastor.

Church members told ABC7 Eyewitness News they hope they can get back on their feet to continue to help people in their community.