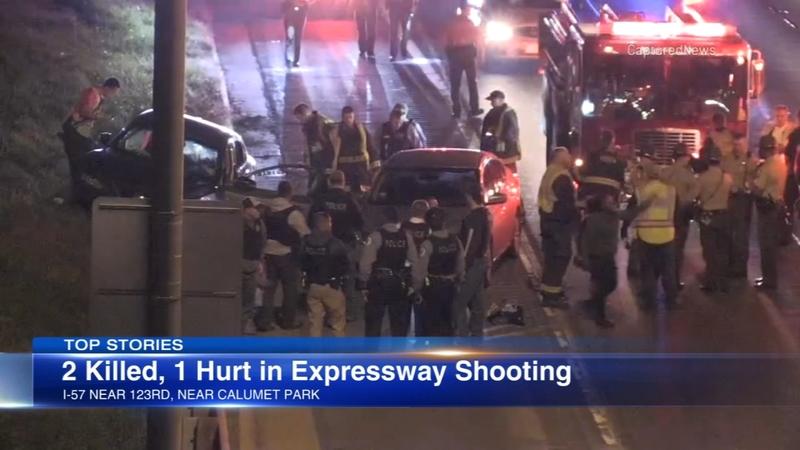 CALUMET PARK, Ill. (WLS) -- Authorities have identified the two men killed in a shooting Monday night on I-57 in Calumet Park.

The victims have been identified by the Cook County Medical Examiner's Office as 25-year-old Parrish Myles, Jr., of Markham, and 25-year-old Gerald Glover, of Burnside. A third person was injured in the shooting and subsequent crash.

The car the victims were in came under fire and then both the victims' car and the suspects' car crashed in the inbound lanes near 123rd Street at about 8 p.m., police said.

Myles, Jr., and Glover were transported to an area hospital and later pronounced dead, police said. A third man was transported to Christ Hospital, where he was treated and released, and a fourth person in the car was not injured.

Police said three people in the suspects' vehicle fled after the shooting and are at large.

All northbound lanes of traffic were closed until about 1 a.m. State Police combed the scene for evidence while traffic was diverted.

Illinois State police say it has efforts in place to combat shootings on area Interstates, by proactively patrolling target areas and using saturation patrols, but this shooting was the second to close the I-57 since last week.

On Friday, a shooting led to the closure of all northbound lanes. At least a dozen shell casings littered the road as state police shut down nearly 10 blocks of the expressway to investigate a report of shots fired near the West Pullman neighborhood on the Far South Side.

In 2018, Illinois State Police said there have been 37 expressway shootings, with 12 on I-57, nine on the Dan Ryan Expressway, five on the Bishop Ford Freeway, four on I-290, three on I-55, two on the Kennedy Expressway, one on I-80 and one on the Edens Expressway.

Meanwhile, it's unclear what led up to the shooting Monday night. Troopers said it's still under investigation.