13-year-old arrested, detained for 14 days after student impersonating her made threats on Instagram

Nia Whims and her family are filing a lawsuit over the incident.
ABCNews
By Adia Robinson 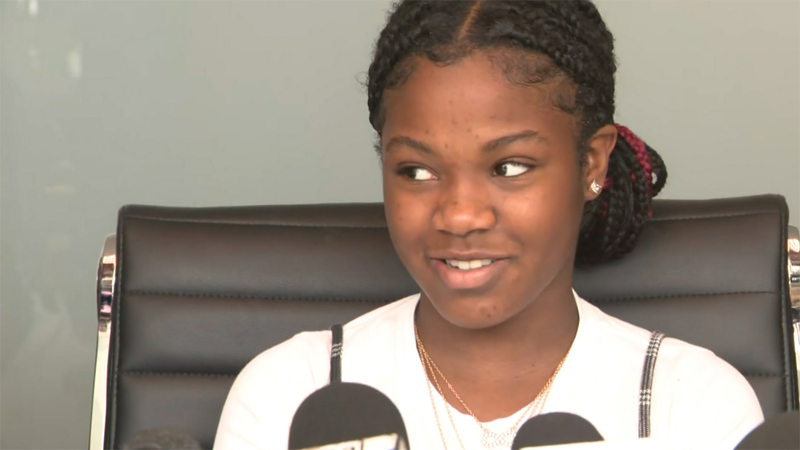 PEMBROKE PINES, Fla. -- Nia Whims, a 13-year-old from Florida, is speaking out after she was arrested and falsely accused of making threats of violence against her school in November 2021. Now, her family is filing a lawsuit against several parties they claim are at fault.

"At first, I felt really lost about the situation. It was a terrifying experience," Whims told ABC News Live Prime anchor Linsey Davis in an interview Tuesday.

Whims was detained for 14 days over the false accusation, according to the family, after a fellow student impersonating her on Instagram made threats against the school. As a result, her family has now filed a lawsuit against the school, Instagram and its parent company, Meta, they announced on Wednesday.

The family also filed a notice of intent to sue the Pembroke Pines Police Department over the incident.

A viral video of police responding to a fight between two teenagers at a New Jersey mall has prompted an internal probe over the treatment of a Black teen.

"When it comes to our children, law enforcement and our school officials must make sure they do their homework before they put our kids in handcuffs," Marwan Porter, the family's attorney, told ABC News Live.
"And we know that, yes, there has been situations that have ended in tragedy where these type of threats need to be taken seriously," Porter added. "But it cannot come at the expense of our children."

The other student, whose name has not been made public, was charged over the incident, the Pembroke Pines Police Department said in a press release.

Whims' mother, Lezlie-Ann Davis, called the experience "traumatizing" for both of them in Tuesday's interview with ABC News.

"Nobody looked into what damage it did," she added. "Emotionally, mentally, you know, and she's still growing. She's young and she's growing. So as adults, a lot of things in our past affect us and I think it's something that will affect her."

The complaint also alleges that Whims was bullied while she was a student at Renaissance Charter School and that the school "failed to investigate or otherwise respond" after it was reported. The bullying got so bad, Davis said, that she pulled her daughter of school only a few days before the November arrest.

Renaissance Charter School did not directly respond to the claims of bullying in the lawsuit, but Colleen Reynolds, a spokesperson for the school, said in a statement, "Our priority is always the safety and security of our students and we immediately involved law enforcement regarding that threat and took all appropriate precautions. We do not discuss any pending litigation, so we cannot comment on the pending lawsuit."

The lawsuit also alleges that Instagram was negligent because it allowed the other student to create fake accounts impersonating Whims. Meta has not responded to requests for comment on the lawsuit.

The Pembroke Pines Police Department also declined to comment on the lawsuit.

In a press release, the department said that Davis didn't begin to cooperate with police until December, at which time police received information that allowed it to request a subpoena for the IP addresses associated with the threatening messages.

Police say their investigation showed that those IP addresses showed the threats were linked to another student who had created email addresses and Instagram accounts with Whims' name and used them to make threats against students and staff at Renaissance Charter School.

At the press conference announcing the lawsuit, Porter said that it would be "naive" to think that race did not play a role in this incident. He also said that the police department's claim that Whims' family did not cooperate was false.

"It's very shocking to see a child be handcuffed for something like that, and I just hope that they deal with it in a different way," Davis said in the interview with ABC News. "No child should be put in jail and taken away from their family at all."

Whims' family is suing for a minimum of $30,000 as well as costs and attorney's fees.