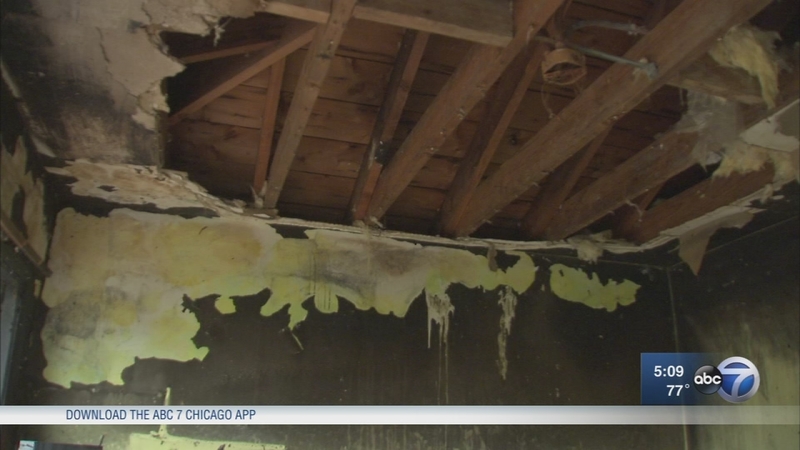 NORRIDGE, Ill. (WLS) -- You trust that your insurance will be there when disaster strikes, but the I-Team investigated a payout dispute between a family that had their home damaged by fire and their insurance company.

It's been more than two years since the blaze was struck, but black soot on the walls and water damage still linger. The family remains in a fiery fight with their insurance company over damage to the home - and how much should be covered by their claim.

"It's a perfect storm of probably just disgust that's in this house that they want to paint over as opposed to remove," homeowner Brian Rousse said.

Two years after the fire, Rousse and his father are trying to salvage their three-bedroom home in Norridge. They said delays started because Travelers Insurance would not evaluate the structure until the home was cleared of debris and belongings. Now, they're battling over the proposed payout.

"We are talking about a big gap of $150,000. A significant difference. Almost like two different eyes are seeing what's going on this house," Rousse said.

Travelers has given the Rousse's $54,000 for the structure and is offering them $22,000 more for the structure based on an "independent expert." The Rousse family said they were skeptical because that estimate consists of mostly cleaning and painting.

"And they were telling me no walls are going to be taken down, we are just going to clean things," Darryl Rousse said.

So they hired a fire restoration contractor. He gave them a much larger rehab estimate - as high as $271,000.

"Between the drywall, electrical, installation, demolition, plumbing and putting everything back together to the latest codes which are required by the Village of Norridge," said Zee Kawa, of Zee's Group.

The contractor showed ABC7 what needs to be gutted and rehabbed from top to bottom.

"Looks like the fire originated in the dining room and opened up the ceiling the flames went into the attic," Kawa said of the kitchen.

In the basement, Kawa said: "You can see already all of this white stuff on it. White and black stuff. This is part of the mold."

"We can see the smoke all over the walls, cracks in the plaster, smoke embedded in the plaster in the paint in the cracks," Kawa said of one bedroom.

The Rousses do acknowledge quickly receiving a $175,000 from Travelers for valuable contents of the home, like coins and vinyl records. They are now demanding Travelers pay the policy limit of $232,000 for the structure itself.

Travelers said: "We are confident we have an accurate assessment of the cost to repair the home, which includes bringing it up to code... the public adjuster's estimate includes repairs that are unrelated to the loss."

The contractor said his estimate is all related to the fire.

Travelers said it's been working closely with the family to repair the home to "pre-loss condition" and that they will take any additional facts that emerge with the claim into consideration.

The family also said that since the I-Team became involved, Travelers has agreed to set up another meeting with them to re-evaluate the home.
Report a correction or typo
Related topics:
norridgeinsurancehouse firei teamconsumer
Copyright © 2021 WLS-TV. All Rights Reserved.
More Videos
From CNN Newsource affiliates
TOP STORIES