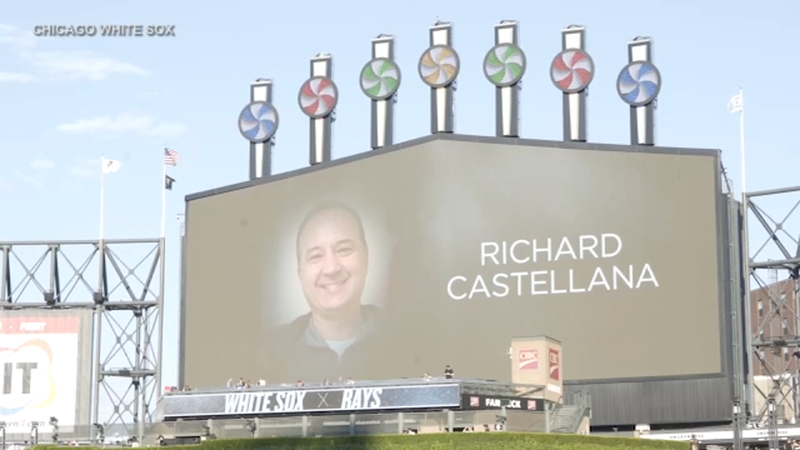 GARY, Ind. (WLS) -- Just before the first pitch, the White Sox honored Richard Castellana, with his kids getting a front-row seat to the touching tribute. They said it was fitting for their father, who loved this team second only to his family.

"There's only a few elite Sox fans I know, and my father's number one," said Castellana's son Michael.

Despite their grief, the family of a bank security guard killed during a robbery in Gary still attended the White Sox game Monday night to remember him.

Caitlin and Michael Castellana sat in the front rows at Guaranteed Rate field along the first base line with their father's closest friends.

"It's nice to get out of the house and to do something that I knew that he would love to do, especially with us," Caitlin said.

They sat in the same area where he had tickets for the Monday night game, while wearing some of his favorite Sox gear.

My father wore a jersey every day to work. I'm going to cherish it for the rest of my life," Caitlin added.

Even though 55-year-old Castellana, also known as Ricky, never made it to this game, the White Sox made sure that his spirit was felt at the park.

The retired Cook County Sheriff Deputy's life and memory was honored on the big screen and the team also surprised his children with a signed Sox's jersey from Castellana's favorite player, Lucas Giolito.

"To know that the White Sox are doing this for my family, it just, it means so much because my father was a die-hard Sox fan," Michael said.

"I think that he deserves this; that's the kind of man that he was. I mean he was such a great person," Caitlin added.

On Friday, Castellana was shot and killed while working security at a bank in Gary Indiana. He was ambushed by two men.

Chopper7 was over the scene where a security guard was fatally shot during a bank robbery in Gary Friday afternoon.

James King, 24, faces murder and robbery charges in connection to the case. The suspect from Miami Florida was found hiding in the woods nearby with thousands of dollars in cash. Another man still on the run.

King appeared in court Monday morning, where he was denied bail.

"This is not the way this kind of person should go, ever," said Caitlin, who is devastated by the loss.

Castellana, of Tinley Park, recently retired in 2019 after more than 30 years on the job to enjoy his life with his wife. He also finally had more time to spend with his two kids.

His daughter recalls the last time she spoke with her dad.

"The same morning before he left, he gave me a hug and a kiss. We were joking around. He said, 'I can hug and kiss you now because Stanley did not see.' Then he left for work -- that was it," she said. "I am glad the last moment was a good moment if you know what I mean."

Castellana was born and raised on the South Side where he lived with his wife.

It was in Blue Island where he met some of his closest friends.

Richard Castellana was shot and killed while working security at this bank in Gary, Indiana Friday after he was ambushed by two men robbing the bank.

"If you are having a bad day and Ricky came into the room, you would definitely be smiling before he left the room," said longtime friend and colleague Deputy Ron Lapka. "He brightened everyone's day, you know, and that's why I think this is especially hard on everyone that knew him."

"He was just the ultimate man. Never a bad word to say about anyone," said Hannah said.

"It's funny because we kind of go back and forth in that because I was a Cubs fan and he was a Sox fan, you know, but I didn't hold that against him," Dep. Lapka said.

"Ricky and I went to 1st grade together, said Santo Chichi, who is another longtime friend. "He was the life of the party. A jokester."

The spirit Castellana has are all memories his friends will cherish.

"He was like a brother to me. I do not know what I am going to do without him," Hannah added.

"What makes me strong about this, is to think that he wouldn't want me to be upset over this, you know. Not upset, you know, just to his passing. He would want me to move on and just think of the happy things about him," Dep Lapka said.

A GoFundMe page has been created to raise money for the family.