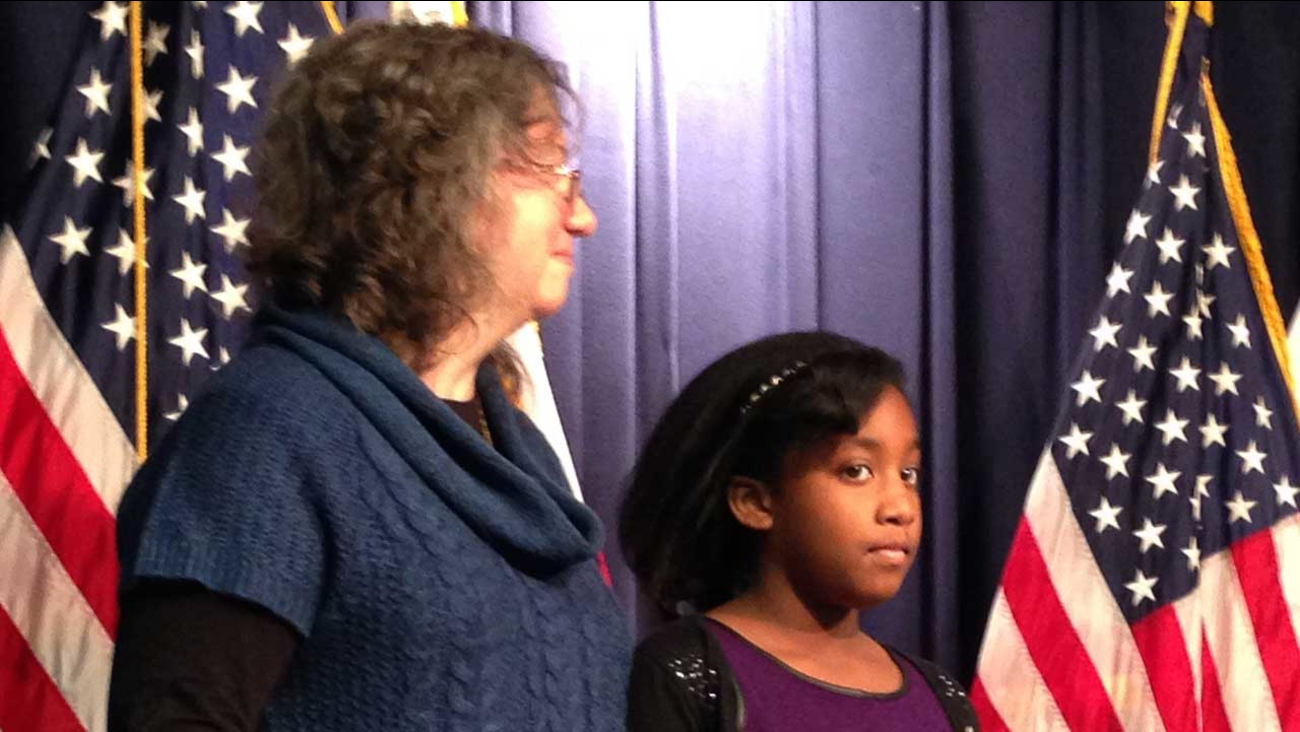 Zoe, 9, and her mother, Tanya, of Crystal Lake, Illinois, wait to speak at a news conference in Chicago on Saturday, Dec. 6, 2014. (Jason Keyser)

CHICAGO -- More than 100 newborn babies have been safely handed over at fire houses and police stations in Illinois in the 13 years since the state passed its safe haven law, advocates said Saturday, celebrating the milestone as a victory while calling for more awareness.

Several of those children and their adoptive parents shared their stories with reporters at an event in Chicago to draw attention to the law and demonstrate that it's working.

"When I was born, my birth mother wasn't ready to be a mom, but she loved me and she knew about safe haven," said a soft-spoken 9-year-old named Zoe, standing on a step-stool to reach the microphones at a podium.

"So she took me to the hospital so I could be adopted. Now I have six brothers, two sisters, three dogs and one cat. And they love me."

Illinois was among the first states to adopt a safe haven law, in 2001. It offers a parent a safe and legal alternative to abandoning a newborn in dangerous circumstances. Children up to 30 days old can be left at hospitals or fire and police stations with no questions asked and no threat of prosecution.

Every state now has a similar law, thanks in part to campaigning by volunteers at the Illinois nonprofit Save Abandoned Babies Foundation, which got the Illinois law passed.

"The reality is most people still don't know about the safe haven law," said Dawn Geras, founder of the organization.

But Illinois Attorney General Lisa Madigan said there are more mothers taking advantage of the law than not.

"There are 100 opportunities for a life that otherwise might not have been," she said of the law's success.

The 100th newborn was left at a fire station a few days ago. Two more followed, bringing the current total to 102.

Children left at fire stations and other safe haven locations are typically taken to hospitals to be checked out and then placed in adoptive families quickly - sometimes within hours - without ever going into foster care.

Zoe's mother, Tanya, of Crystal Lake, said the real hero of their story is the woman who had the courage to recognize she couldn't care for the girl and gave her up safely.

Tanya got the call from her adoption agency as she was walking out of work.

"Literally, Zoe was home that day," she said. "We hit the store on the way out. Grabbed a crib, grabbed the bedding, grabbed everything else, (and) had her in our arms four hours later in her favorite yellow blanket."

She asked that only their first names be used to protect her daughter's privacy.

Zoe is now in fourth grade, plays volleyball, makes art and loves cooking. She can even make jambalaya.

Also at the event Saturday was 4-year-old Riley Dunnett, who playfully darted between chairs set up for the news conference as her father spoke of the elation he felt in picking her up after waiting five years on a list to adopt.

"We weren't really sure it was ever going to happen," said Shawn Dunnett, 39, from Geneva, Illinois.

Now, he's in awe of Riley's limitless energy, and her dancing and renditions of hit songs from the movie "Frozen."