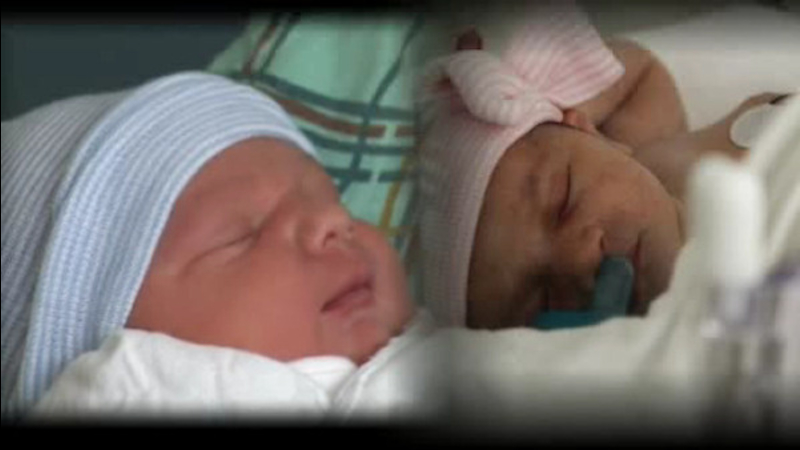 MINEOLA, N.Y. -- This is what you'd call a family affair; two Long Island brothers; Kenneth and Michael Nathan, both had children born Wednesday.

"It's just an awesome feeling. It's surreal, it really is," said Michael Nathan, father.

When their wives found out they were pregnant at the same time they joked that this sort of thing could happen, but their due dates were 3 weeks apart.

Michelle was a week late when she went to Winthrop-University Hospital to be induced. Meanwhile, Christina was going into labor 12 days before her due date.

"We were literally texting each other back and forth, where we were at with the whole labor process, it was cool," Michael Nathan said.

The women were five rooms apart. Almost the exact same scenario happened to their OB two years ago, so Dr. Seth Plancher was ready.

"We were running back and forth and almost keeping score, like room 5 is 5 and room 10 is 10 in a sort of joke that we had, but thank God they were sort of close to each other in the delivery room," Dr. Plancher said.

Her cousin Jackson arrived less than three hours later at 7:15 in the evening. He weighed in at 9 lbs. 3 oz. He's the fourth son for Michael and Christina, so it turns out Abigail is already stealing some of the spotlight.

"She's got to be spoiled rotten, she's the first niece," Michael Nathan said.

A first niece that will be sharing her birthday with her cousin.

"To have something that's on the same day, it's awesome it really is, it just brings the family closer together which is great," said Christina Nathan, mother.