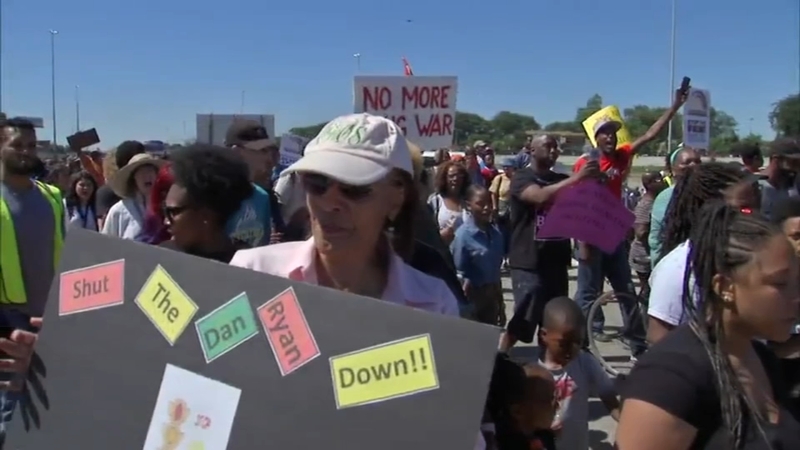 CHICAGO (WLS) -- Governor Rauner is ratcheting up his war of words with Mayor Emanuel over the protest this weekend that shut down a portion of the Dan Ryan Expressway.

Rauner said Monday that he supported the goal behind the protest, raising awareness about crime and joblessness that plagues the city's South and West sides, but then he went a step further, wading into the mayor's race, suggesting because of those problems it's time for someone new in City Hall.

"I do believe there's been fundamental dramatic failure in the city of Chicago, the violence, the lack of job opportunities, the brutally high taxes that just continue to rise, we've got failure and we need to change," Rauner said.

The comments came after a stinging tweet from the mayor to the governor on Saturday. After Rauner criticized the mayor about the protest the mayor fired back, telling the governor to delete his account. The mayor did not address the issue today, but on Sunday he chastised the governor.

"It was a peaceful march to raises awareness. But don't focus on that because then you are overshadowing the important message. Let me step back; I said what I said to the governor, it's over," Emanuel said.

Besides the mayor, Rauner also criticized the marchers for their tactics which he called dangerous and wrong.

"I think the governor needs to understand that civil disobedience is doing things that the mainstream feel are not acceptable," said Father Michael Pfleger, St. Sabina Church.

Pfleger said the blame is shared far beyond City Hall.

"It's a fundamental failure on the elected officials in the state and in Chicago," Pfleger said. He added that some of the youth involved in the march want to meet with the mayor and governor and the candidates for those offices to talk about the issues.