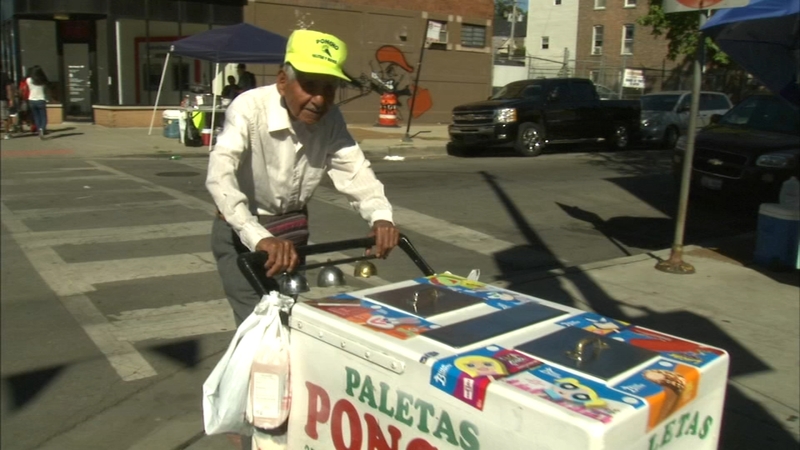 CHICAGO (WLS) -- A man who earned national attention for selling popsicles out of a cart in Chicago's Little Village neighborhood has died, but his legacy of hard work and determination lives on.

Fidencio Sanchez died Wednesday of complications of sepsis, according to a friend's announcement posted on Facebook.

"The family wants to give thanks to everybody from around the world that made his last three years of life happy and comfortable," Joel Cervantes Macias wrote. "He was amongst family and loved ones by his bedside when he passed."

Three years ago, Sanchez earned recognition when the then 89-year-old was seen pushing his paleta cart, earning money to help his family after his wife got sick and his daughter died.

"Personally, a lot of people can relate to that story. My grandpa was one of the guys who sold elotes here," said Imelda Uribe.

Sanchez received more than $380,000 to help him pay healthcare bills and finally retire after pushing his ice cream cart for 23 years.

"I'm just glad that we were able to contribute to helping him have a nice retirement," said Jose Loera, who helped start the GoFundMe campaign.

Initial hopes were to raise $3,000, but donations poured in from around the world. More than 15,000 people in 60 countries donated to help Sanchez and his wife.

"When he initially got the money, he felt a little guilty about buying a $3,000 hearing aid," Loera said.

For 23 years, Sanchez pushed his cart down the street selling ice cream for $1.50 each. But thanks to the fundraising campaign, he was able to retire and enjoy the rest of his life.