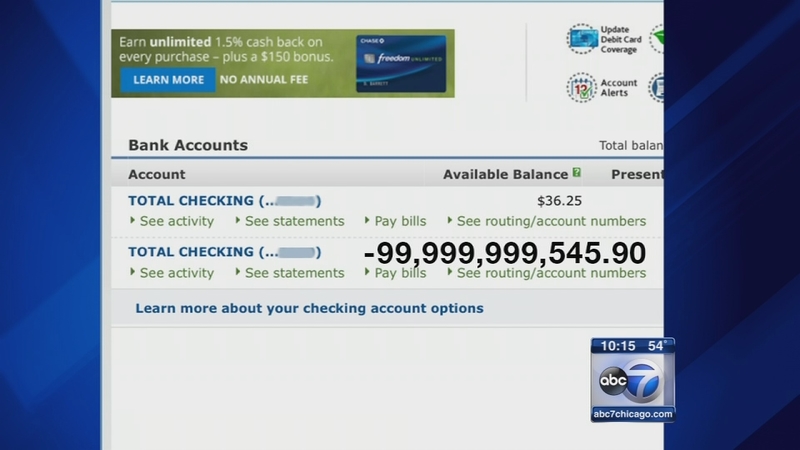 CHICAGO HEIGHTS, Ill. (WLS) -- Imagine checking your bank balance and seeing it's overdrawn by more than $99 billion. It happened to a south suburban Chicago Heights woman.

Sheila Henderson contacted Eyewitness News because she was concerned she'd be held responsible for the $99 billion. She says she wouldn't even know how to spend that much money!

When Henderson heard that mind-boggling number Wednesday, she said she almost had a heart attack.

"I was in shocked. I couldn't even speak. I called it again," Henderson said.

Ninety-nine billion dollars was withdrawn from a Chase Bank account belonging to her mother, who passed away last month. Henderson says she's listed on the account. She was calling to check the balance to pay off some of her mother's funeral expenses.

"I called my brother to listen to it and the first thing he said, 'You have been hiding all this money from me. Why did you do this? Come on. Let's go.' I was like, 'No, it says it is a negative amount on it," Henderson said.

Chase Bank told Eyewitness News that they're investigating and they will work with her to fix the issue. Henderson calls it a $99 billion mistake.

"I think I might stick with Chase. I do like them. People make mistakes. But it's a scary mistake for me though," Henderson said.