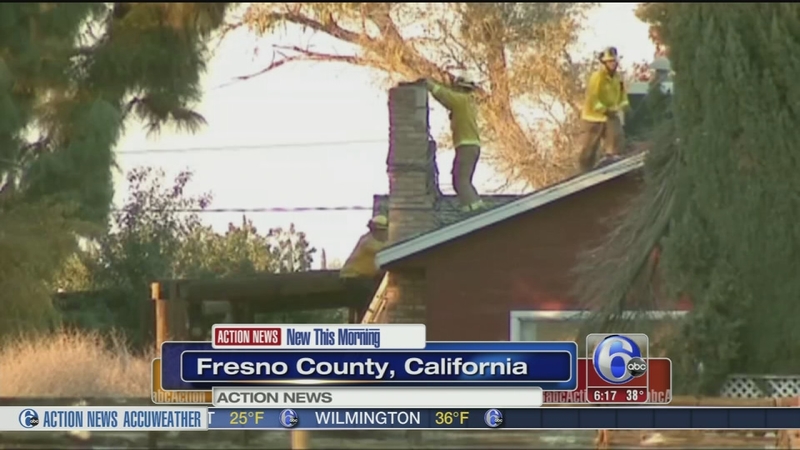 FRESNO, Calif. -- Authorities say a suspected burglar who became stuck in the chimney of a Central California home died after the homeowner unknowingly lit a fire in the fireplace.

Authorities said a homeowner in the rural town of Huron heard someone scream after lighting a fire in his fireplace Saturday afternoon and alerted authorities.

When the homeowner realized a person was stuck in the chimney, he extinguished the fire.

Lt. Brandon Pursell said Caldwell was responsive when firefighters smashed the chimney to get him out, but when they got to the young man he died.

Friends say Caldwell had a tough year and a lot of bad luck. They say he was a decent guy.

In the last neighborhood where Caldwell lived, neighbors weren't exactly rushing out to talk about him, or his death. Many would only say he often asked them if they wanted to buy things like stereos or small air conditioning units.

Fresno County sheriff's investigators say they don't have much background on the suspect.

"We don't have a lot of history with Cody," Botti said. "We can't tell you much about him. We don't have any criminal history as far as him booked into the Fresno County Jail."

The homeowner at the residence where Caldwell died told deputies his house had been burglarized several times recently, but he never bothered to report it.

The victim only called 911 Saturday after trying to rescue the trapped man himself without success.

"Once firefighters got there, Caldwell was conscious," Botti said. "He was breathing, he was moving around in the chimney, so there was a chance to save him, but it just appears the smoke and heat were too much for him."

The burglary victim said he does not recognize Caldwell and has no idea why he or his home may have been targeted.

Deputies discovered the homeowner was also wanted by law enforcement.