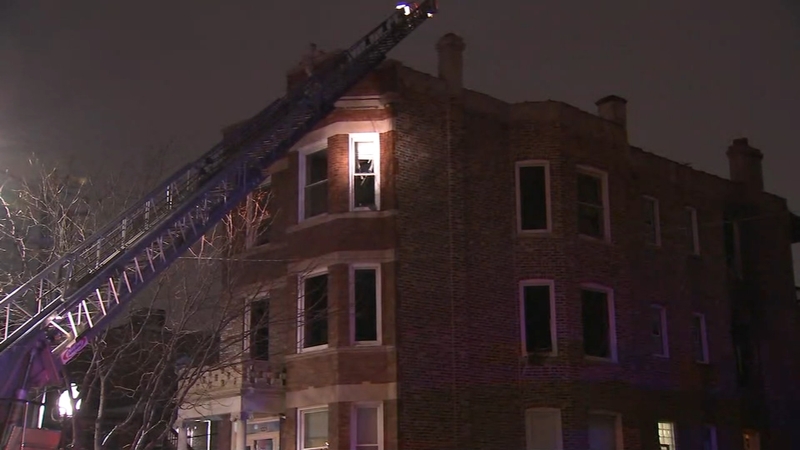 CHICAGO (WLS) -- A fire tore through a North Lawndale apartment building Friday morning, forcing firefighters to use a ladder to rescue several children.

Firefighters responded to the fire at about 4 a.m. in the 1200-block of South Central Park Avenue and there was heavy fire in the second floor and spreading to the third floor.

No one was injured in the fire and eighteen people have been displaced.

One neighbor said the entire space is now unlivable.

"It's after Christmas," said Ronina Sims, who escaped the fire. "I'm just totally just like hurt. We lost everything."

The size of the building and intense fire triggering an increased response from the Chicago Fire Department.

"We had heavy fire in the rear on the second floor, communicated up the rear porches to the third floor," said CFD 14th Battalion Chief Don Hroma.

Sims says her 11-year-old nephew was still up playing video games and warned his family.

"I'm very proud because if he didn't wake us up it could have been a worse outcome," she said.

Sims, her boyfriend, brother niece and nephew all made it out safely, but the blaze trapped several children upstairs. One neighbor saw people jumping onto the second floor balcony.

"There were people hanging out of that third floor window on the front side of the building," Hrona said. "A couple people started to hang jump out."

Firefighters rescued the group by ladder as they put out the flames. CTA brought a warming bus and the Red Cross offered immediate support for the 18 people displaced, 10 of them children.

"I don't care about any of the materialistic stuff," Sims said. "I'm just glad everybody's safe."

Remarkable considering Sims says she watched someone jump out of the third story window to the ground, but no one went to the hospital.