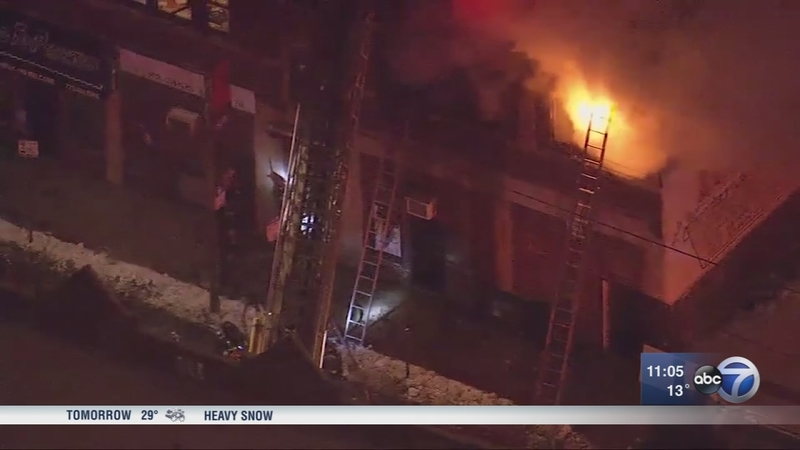 CHICAGO (WLS) -- Three people, including two Chicago police officers, were injured after a fire at an apartment building in the East Chatham neighborhood Thursday morning.

The fire started in a second floor apartment and burned up to the third floor of the building on 79th Street near Langley Avenue. The building has businesses on the first floor.

Two police officers and a resident were transported to hospitals and all are expected to be ok, fire officials said.

The fire was struck out by about 6:40 a.m., with firefighters remaining on the scene to put out hotspots.

One woman said she almost jumped out of her apartment window to survive. Meanwhile, a neighbor was knocking on doors to save lives.

Cheryl Stewart made it onto her window ledge in the freezing cold, as white smoke filled her third floor apartment.

"I was so scared, I just kept saying, 'God, please don't let me die like this, please,' it was so much smoke," she said.

She was roused out of bed by smoke detectors going off in her building at around 3 a.m. Her neighbor, Willie Cook, convinced her not to jump as the fire raged.

"I had to calm her down because she was ready to jump I just told her it's all in the front, don't worry about it, it's just smoke," Cook said.

Fire crews rescued Stewart by ladder. Meanwhile, Cook tried to help others get out.

"So I tried to see where the fire was coming from and it looked like it was coming from inside the walls, so I started knocking on everybody's doors telling them to wake up," Cook said.

10 residents were displaced, taking shelter inside a warming bus. At one point during the fire fight, crews had to evacuate.

"There was a collapse between the second and the first floor. It was noted by the companies on the interior at that time command at the time had everybody evacuate out of the building because of our concern for our members," said Deputy Fire Chief Dan Cunningham.