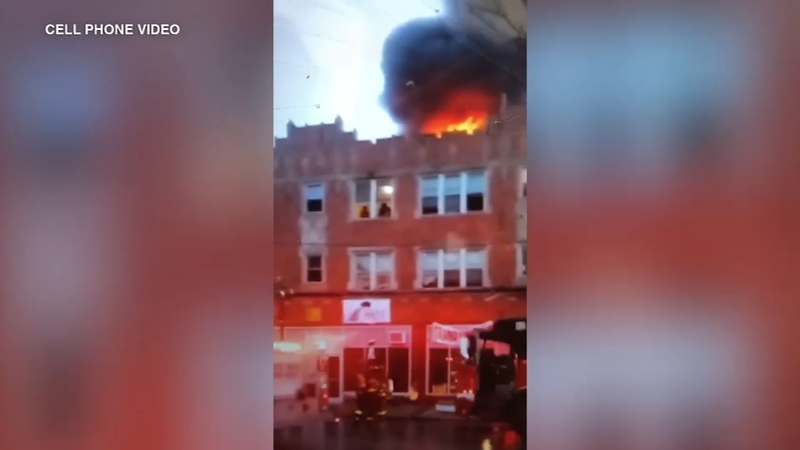 EMBED <>More Videos
CHICAGO (WLS) -- Six people, including two children and a firefighter, were transported to hospitals after an extra-alarm fire in the South Shore neighborhood Friday morning, the Chicago Fire Department said.

Calls for help first began around 6:30 a.m. when some residents of a three-story building in the 7900-block of South Phillips Avenue were awakened by the warnings of working smoke detectors, thick black smoke and the smell of fire.

Devin Bell and his family jumped 20 feet to the ground.

"Smoke everywhere, alarms going off, people running around everywhere. You can't get out, so best to jump out the window," he said.

Yolanda Givens was about to jump when she realized the window was her only escape.

"I went to the front door and see smoke and see fire," she said. "The fire was so close to my door, it was at my door, so I pushed my window and asked people down there to help."

The fire was struck by about 8 a.m.

Fire officials said the fire appears to have started in the second floor and is suspicious in nature. Sources close to the investigation told ABC7 it may have been deliberately set and the result of some sort of argument.

Givens and 23 other residents were rescued by ladder. She and several other neighbors, including two children, were taken to the hospital for smoke inhalation, in addition to a firefighter battling the blaze.

"One of our members became disoriented, so it was elevated to a 3-11 alarm. He was immediately found and taken for observation," said deputy fire commissioner Richard Ford III.

"We just exited out the back and saw a lot of smoke and saw a lot of people screaming and kept a safe distance away from the building and stuff," said fire victim Aaron Campbell. "I'm glad everybody got out."