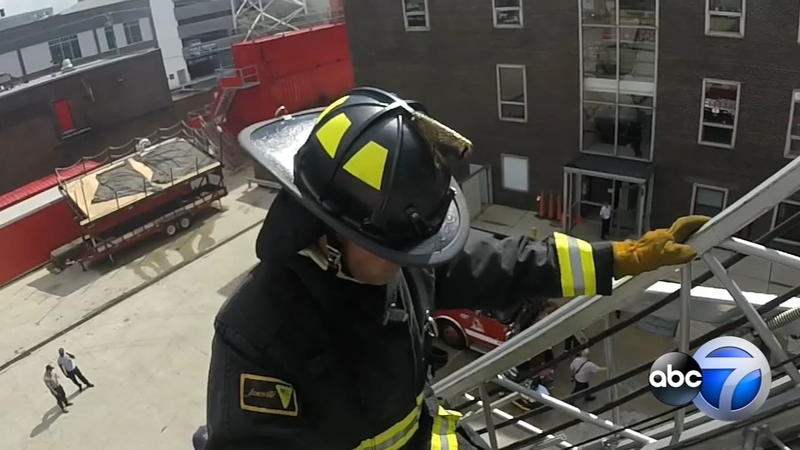 CHICAGO (WLS) -- From afar, fighting fires and rescuing people from burning buildings looks exhausting and dangerous. But training at the Chicago Fire Department's academy proved just how physically trying this job can be.

With city aldermen and other reporters, I suited up in full gear just as CFD candidates do each day-boots, overalls, protective jacket, helmet and air pack. Combined, all of that equipment is roughly 100 pounds according to instructor Lieutenant Edward Newcomer.

"You get a small taste of it for a few hours, they're going through three months of training, and it's much more intense," he said, adding, "by the second half of the training, they're in gear all day long-eight hours."

Firefighters drill to be fully dressed and out the door in less than a minute; on scene they aim to secure their air packs in 30 seconds. Why the rush? Simply put, "somebody could be trapped," said Newcomer.

This preparation is more important than ever before, CFD will tell you, because new synthetic materials in our homes burn harder and faster.

As part of emergency response simulations, we practiced breaking through doors, pounding a sledge hammer into a pry bar until the door opened. Protective clothing that raises core temperature made the physical impact all the more strenuous. But, as I was reminded, there's no time to rest when you've gotten through the door-the work has really just begun.

"All you've done is get through the door. Now you still gotta go in and find the little kid, find mom and dad. You gotta go and put the fire out," Newcomer said.

Same deal when you've climbed five flights of stairs or a ladder truck with hoses, saws, sledge hammers and other equipment on top of your basic gear.

We had it easier- just two flights of stairs with one hose and a tool bag; that was tough enough. My heart was throbbing, my breathing heavy.

Among the aldermen visiting was Alderman Matt O'Shea (19th ward). He'd already done this simulation once before and said he again left with a renewed appreciation for what this job requires.

"Several years ago, there was a discussion of reducing manpower on the rigs, and after being here today, that topic should never be discussed again."

After months of drilling, Lt. Newcomer says those firefighters are ready for your emergency calls.

"If you find yourself in an area that you can't get out normally, you know, keep yourself in a room, cover up the doors and find a window and, if you had a phone with you, call, let 911 know where you're at. You know the house better than anybody. And we'll get you. We'll get you out of there."
Report a correction or typo
Related topics:
chicagobuilding firefirefighterschicago fire department
Copyright © 2022 WLS-TV. All Rights Reserved.
CHICAGO FIRE DEPARTMENT
Explosion damages 4 cars in Humboldt Park
Calls for cooling ordinance grow after 3 found dead in Rogers Park
Tenants call for action after 3 found dead in North Side building
3 found dead at North Side living center; CFD cooling building
TOP STORIES
CPD officer shoots, critically injures 13-year-old carjacking suspect
911 dispatcher who took Buffalo shooting call put on leave
Markham police investigating how elderly woman ended up in vacant home
Man, 63, shot outside South Side gas station, CPD says
NY high court to determine if Bronx Zoo elephant is a person
Chicago '9-Man' team grows sport rooted in Chinatowns, exclusion
Millennium Park restrictions for minors start Thursday
Show More
Richard Thomas stars in 'To Kill a Mockingbird' on Chicago stage
School celebrates entire graduating class accepted into college
CDC advisory panel greenlights booster shots for children ages 5 to 11
Chicago Weather: Partly cloudy
WI man eats Big Mac every day for 50 years
More TOP STORIES News