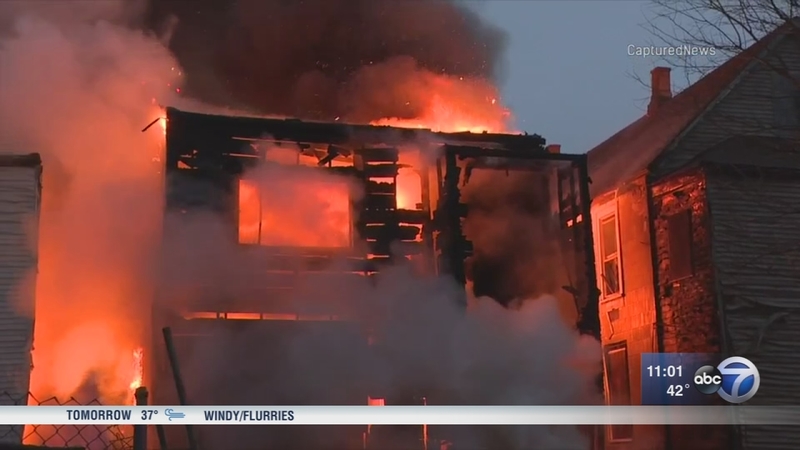 CHICAGO (WLS) -- One firefighter suffered a minor injury after an extra-alarm fire in the Englewood neighborhood, the Chicago Fire Department said.

Firefighters were called to the scene of the fire in the three-story home in the 7000-block of South May Street at about 6:16 a.m.

Fire crews put out a mayday call as the outer brick walls started to collapse and the roof caved in.

"There was May Day call at that time because there were companies working near the structure, not inside it, near the structure and there was a threat that somebody might have been lost inside the collapse as the wall came down," said Deputy Fire Commissioner William Vogt.

All firefighters were accounted for, but one was hit by a falling brick. He was transported to a hospital in good condition and is expected to be ok.

"All of the fire initially was situated in the rear of the building so the whole back end of the building was heavily involved with fire upon our arrival," said Chicago Fire Battalion Chief Mitch Crooker.

The building was marked with a red x, so fire crews knew ahead of time that it was vacant and structurally unsafe, so they didn't go inside. Patricia Wilson, who lives next door, had to evacuate with her family.

"I heard something popping and it sounded like a loud noise and I just looked out and I could see the flames illuminating off the garage," Wilson said. "God is good. We are ok, me and my kids and grandkids."

Neighbors said the building has been abandoned for a long time and believe a squatter may be to blame.

"There are a whole lot of empty properties in Englewood, you know, that people just don't want no more because of the property taxes," said neighbor Ricardo Pittman.