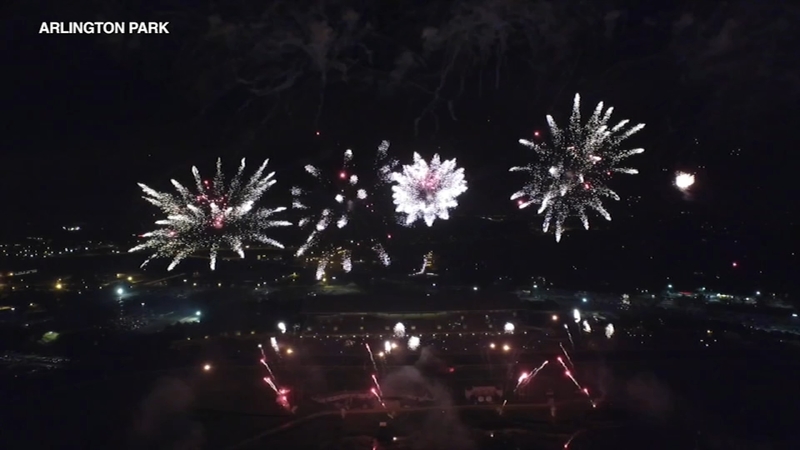 ARLINGTON HEIGHTS, Ill. (WLS) -- Independence Day celebrations may still look a little different this weekend as fireworks in some Chicago suburbs are cancelled once again due to the COVID-19 pandemic. But some northwest suburban towns are going all out.

They have always done it up big for the 4th of July in Elk Grove Village. But this year the village plans on making it bigger than ever, adding money to the fireworks budget and hosting a concert with Daughtry headlining.

Mayor Craig Johnson said he planned it back in March, hoping the pandemic would be under control by now.

"We were willing to take the risk cause we truly believed studying everything we saw and when the CDC director came out and said if you're vaccinated you cannot carry you do not give, that's when we jumped on board 100 percent," said Johnson.

It's likely to be the last big July 4th fireworks show at Arlington Park as they close for good in September. It's normally one of their biggest nights of the year but this year they are promising even more.

"It's gonna be a fireworks display you don't get to see anywhere else," said Tony Petrillo, Arlington Park.

Many other communities however, like Park Ridge, are holding scaled-down events without fireworks. They said they based the decision on COVID rates earlier in the year when plans had to be put on hold.

"Based on those mitigations that were in place at the time and not knowing what was going to be in place July 3rd , we did, with our partner organizations. the city of park ridge and school district 207 decide to cancel the fireworks," said Margaret Holler, Park Ridge Park District.

One of the biggest fireworks shows in the area is traditionally in Itasca. They have opted to go ahead with the show this year but the concert and festival that normally goes with it are a no-go. Ironically it's because they are unable to find enough workers to handle the expected huge crowds.