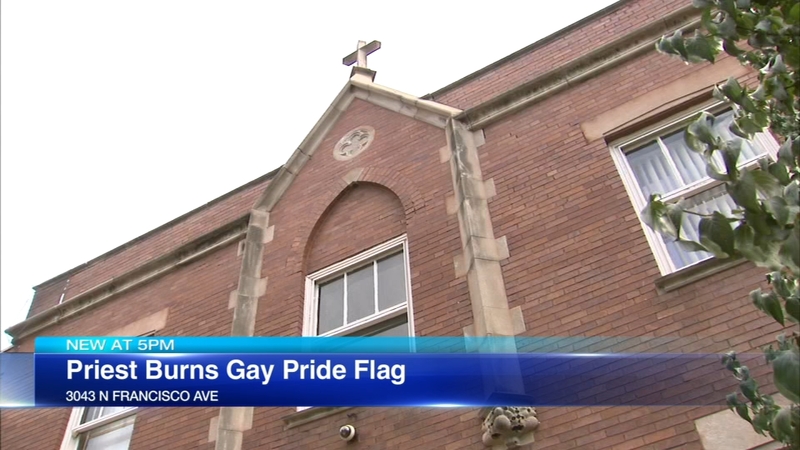 CHICAGO (WLS) -- A pastor burned an LGBTQ pride banner outside of his church, despite being told not to do it.

Peaceful protesters are calling for a priest to be removed after he burned a rainbow banner that supports gay parishioners.

The protest was outside Resurrection Catholic Church Wednesday with the dozen or so in attendance saying hate has no place in this community.

"To think that this hatred is being spread in our neighborhood is not acceptable, said 33rd Ward Ald. Deb Mell.

She and others gathered across from Resurrection Catholic Church with rainbow flags in hand, one rainbow-decorated sign saying "hate is not holy."

"It is not ok to demonize a whole community and put out hatred rhetoric to make himself feel better," Mell said.

This after Kalchik burned a banner supporting gay parishioners.

He told the Chicago Sun-Times it had been in storage for a decade. He called it a piece of propaganda.

As church bells rang Wednesday night, there's no answer from Father Kalchik at the rectory door. But a supporter going only as "Patrick" spoke in Kalchik's defense saying, on the contrary, Kalchik is in favor of the LGBT community.

"He is a big supporter of them and he is not against them whatsoever," Patrick said.

We asked, if he's a big supporter, why did he burn the flag?

"He was burning that flag which was not symbol of LGBTQ," Patrick said.

The archdiocese issued a statement earlier saying quote: "...Archdiocese leadership previously contacted the pastor to notify him he could not move forward with that planned activity. We are following up on the situation. As Catholics, we affirm the dignity of all persons."