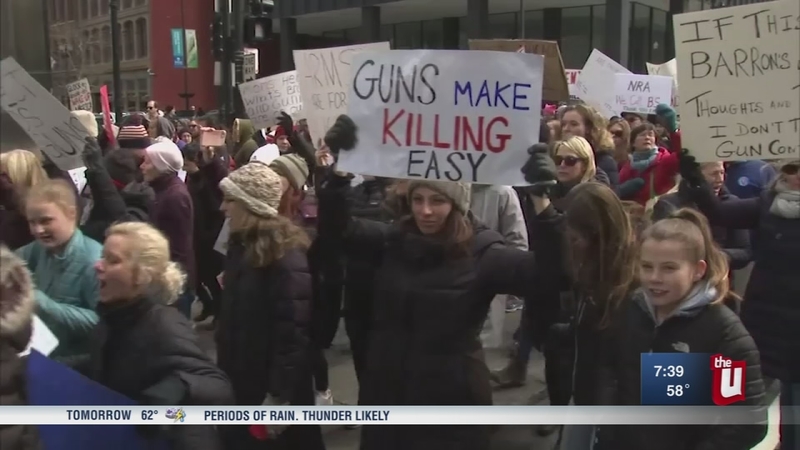 CHICAGO (WLS) -- Students in the Chicago area are joining young people from across the country in a call for action to reform the nation's gun laws.

Florida students who lived through last week's shooting have turned their pain into activism. Their anger has sparked student marches and protests throughout the county.

Students staged a three-minute lie-in in front of the White House Monday-- the same amount of time it took the Florida high school shooter to buy an assault rifle.

A call to action started by students who survived last week's massacre, has sparked a student movement nationwide.

"There is nobody else that is better to do this than those who are going through such an experience," said Chicago high school student Cecilia Ruiz.

Students from the Mikva Challenge said it's time to hold politicians accountable who do nothing to keep them safe in school.

"I live on the South Side of Chicago, school is one of the most safe places that I know. I shouldn't be scared to go to school," said Chicago high school student Marcus Ward.

"We are all at an age where we are about to vote. Voting about it will make a difference," said Zainab Qureshi, an Aurora high school student.

The power of voting is the warning students want to send to lawmakers who don't act soon.

In Illinois, two bills are pending in the House. One bill is to license gun dealers. The other is called the emergency lethal violence order of protection, a gun restraining order bill that may have prevented a mass shooting like the Florida one.

"What it does is enables immediate family members and law enforcement to petition the courts to remove guns on a temporary basis, because they think someone might hurt themselves or others," said Colleen Daley with the Illinois Council Against Handgun Violence.

Colleen Daley with the Illinois Council Against Handgun Violence and State Rep. Ann Williams (D - Chicago) plan to host a meeting for parents, students and community members this weekend who are calling for action.

"I'm hopeful the increased engagement and awareness of issues will lead to this being the straw that breaks the camel's back," said State Rep. Williams (D) Chicago.

State Rep. Ann Williams said her offices has been flooded with phone calls from parents who have had enough and want to get involved.

Meantime, many Chicago-area students plan to join others nationwide on March 14 for a planned walk out of schools to protest gun violence.

There are other walkouts planned as well. One in Washington, DC, on March 24 and another on April 20, the anniversary of the Columbine school shooting.
Report a correction or typo
Related topics:
high schoolgun controlgun lawsstudents
Copyright © 2021 WLS-TV. All Rights Reserved.
More Videos
From CNN Newsource affiliates
TOP STORIES