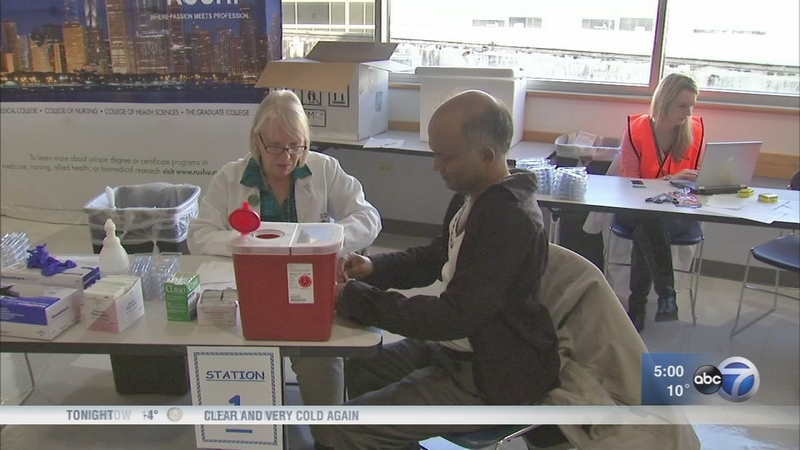 CHICAGO (WLS) -- The flu spread fast in Cook County this season. As of Friday, hundreds of cases had already been confirmed. The numbers are staggering.

Doctors at Rush University Medical Center alone saw 70 confirmed cases of the flu last month. In December of 2016, there were only 12 cases at Rush.

The number of flu cases in Cook County may increase, health officials said. Doctors said when the flu season hits and how powerful the strain will be can be completely unpredictable.

The flu is spreading fast this season. As of Jan. 5, there have already been hundreds of hospitalizations.

Across the Chicagoland area, more than 1,500 people have tested positive for influenza. That number is based on voluntary information. Officials said the actual number may be even higher than that.
This year's strain struck earlier than usual and causes more severe symptoms, including a fever, cough, sore throat and a runny or stuffy nose.

NOT TOO LATE FOR FLU VACCINE

Doctors said this year's flu vaccine may not be a good match for this strain. But it's still better to get a flu shot because it may help make symptoms less severe.

Dr. Sharon Welbel, Director of Infection Control with Cook County Health Systems, wants to put this question to bed. She said not only will you have a better chance of staying flu free but...

"If one gets vaccinated, it's more likely that that person will have a milder case of the flu. They may be less likely to be hospitalized, they may even be less likely to die," said Dr. Sharon Welbel, Director of Infection Control with Cook County Health Systems.

This as county doctors are seeing a major spike in the flu. They've already documented close to three quarters of the flu cases they saw last year for the entire season and there are still almost three months to go.

"This season we're seeing influenza and a severe strain of influenza spread earlier than in years past. We're seeing illnesses that are requiring hospitalization and in fact critical care support among both adults and children," said Dr. John Jay Shannon, CEO of Cook County Health and Hospital Systems.

The flu has brought changes to Cook County-run Stroger and Provident hospitals. Children under 12 will not be allowed to visit patients until further notice. Additional flu screenings are also taking place.

"Even the clerk at the desk was coughing. And a couple people with masks. And I asked one for myself because the lady next to me kept coughing and she didn't cover her cough," said Melissa Hill.

To those of you who don't get a flu shot, diabetic Betty Ford has something to say.

"They don't get it. Just what you said. It's important that you take them flu shots because you never know. And I'm just one of those who tries to stick to what my doctor tells me, and lookie here I've made it to 60 so I must be doing something right! Darn right!" said Betty Ford.

Doctors said it is not too late to get vaccinated. The best time was back in October, but if you haven't gotten the flu yet, it could keep you from getting it and lessen those awful symptoms if you do get it.

The best advice to keep yourself healthy? Wash your hands, cover your cough and cover your sneeze.