Father and son bring nduja sasuage to the Chicago masses 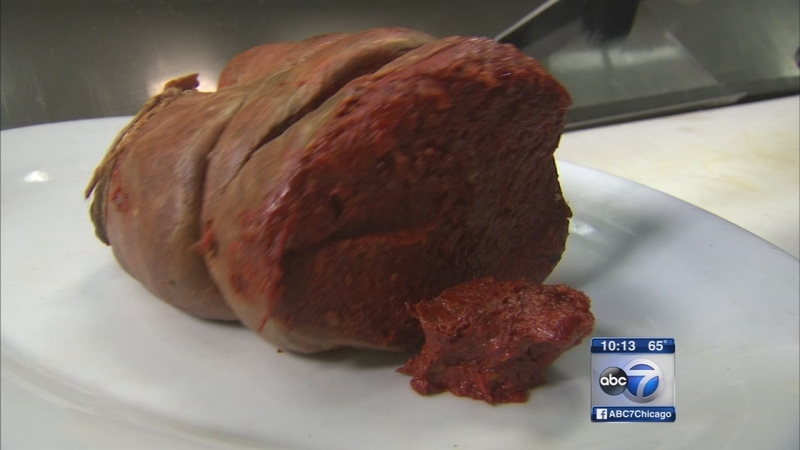 FRANKLIN PARK, Ill. (WLS) -- You've heard of salami, and maybe even prosciutto, but there's another Italian sausage not quite as well known, making its way into local grocery stores and restaurants. The driving force behind it is a father-son team doing it all from west suburban Franklin Park.

It is called nduja, and you're going to be seeing a lot more of it, thanks to a father and son team now selling it to stores like Eataly and Mariano's, as well as restaurants ranging from Davanti Enoteca to Spiaggia. It is simply a spicy, spreadable sausage, but it's unlike any encased meat you've ever seen.

Antonio Fiasche and his father, Agostino, spend plenty of time together in a Franklin Park processing facility. It's here where they make an Italian original, under their label: Nduja Artisans.

"Nduja is a spicy, spreadable salami; it's the most famous salami out of Calabria - one small part of Calabria," said Fiasche.

"We import our own peppers, we use some domestic, we do a nice mix," he said.

The pork, fat and chiles are ground up into a rough blend, then the chile salt is added, and a narrower grinder plate is added, resulting in a finer, more even blend. Agostino then carefully encases it, forming it into the same ancient shapes his ancestors did, while Antonio ties them up with string and prepares to hang them in an enormous aging room, along with the other salami, guanciale and sopressata they produce. They'll age four to six months here, before hitting the markets.

"In Calabria we do it, it's very, very hot. I enjoy it that way, but we thought to tame it down a little bit so you could keep eating it," said Antonio.

And you can always eat it at the family's restaurant, Ristorante Agostino, on the western edge of the city. They sell it, but they also use it in about a half dozen dishes. You quickly see why they call it "pork butter," because it spreads easily on crostini, and works extremely well with plum tomatoes and basil for a sweet, spicy, acidic sauce that coats Calabrian pasta. They'll even cook it with mussels, and serve it over toast.

"Kind of like a play on how the Spanish would do chorizo and clams, so we do mussels and nduja," he said.