WLS
By Steve Dolinsky
CHICAGO (WLS) -- Chicago has plenty of Polish restaurants, and a fair amount of Korean restaurants.

The restaurant is the brainchild of a group of partners who happen to be half Korean and half Polish. And it turns out there are more similarities between the two cultures than one might think.

A Polish sausage on the grill, tucked into a griddled bun. No big deal. But at Kimski, the new addition to Maria's Packaged Liquors on 31st Street, that Polish gets covered in soju mustard, some kraut-chi, fresh scallions and toasted sesame seeds.

Everything on the menu here is a hybrid of Polish and Korean.

"Both cultures rely heavily on cabbage and a lot of root vegetables and leafy greens, salted," said Chef Won Kim. "Each culture has dumplings, they have pierogis, we have mandu or just potstickers."

Chicken wings are first smoked then fried; they get tossed in a Korean-style chili sauce, scallions and sesame. Even pancakes are unique here. A Korean pajun, with scallions, is paired with both kimchi and a kraut-style fermented cabbage, covered with pieces of roast pork in a medium spicy sauce and sweet potatoes.

"There's pancakes in both cultures, there's some kind of flour-based mixture that's like a crepe and we just figured it's hearty enough with the potatoes and the wild scallions bring that onion-y flavor and who doesn't love potatoes and onions flavor together?" said Kim.

Kimchi fried rice is straight-up Korean, but the addition of an egg, and pork, lend it Eastern European accents too.

Kim asid they're not trying to be part of the new wave of Korean. They simply want to cook what they like to eat.

Now as tasty as the dishes are at Kimski on a limited menu, they always have three or four daily specials.

EXTRA COURSE: Steve Dolinsky talks with the co-owner of Maria's about the new addition in the back of the bar, as well as about two of his favorite beers. 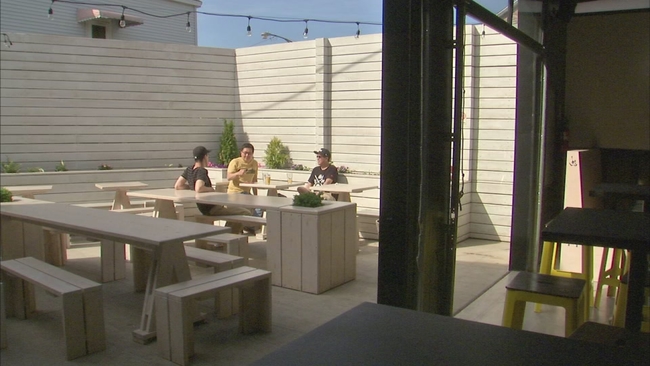