WLS
By Steve Dolinsky
MORTON GROVE, Ill. (WLS) -- Hand-held snacks are always popular, think pierogi, dumplings and calzones. But ABC 7's Hungry Hound said the empanada is also worth seeking out, and he's found a shop making what are, in his opinion, the best in the region.

Empanadas come from Argentina, and so you'd think finding the best versions would involve seeking out a neighborhood in the city, or an Argentinian mom-and-pop store somewhere. Nope. Just head down Dempster, past Harlem Avenue in Morton Grove of all places for empanada nirvana.

You can clearly see the commitment to making everything from scratch, inside the small kitchen at Savory Crust, in a Morton Grove strip mall that's easy to miss. It's the brainchild of two Filipino sisters, who were used to eating empanadas, but wanted to create something original.

"We decided to create a more eclectic, and a more hip, maybe, empanada with Philly cheesesteak and chicken pot pie. Something that was in the shape of an empanada but also made of a more flaky dough which is baked versus fried," Geri Hernandez, co-owner, said.

That dough is the star. With butter as reinforcement, the shell is flaky and tender. But those fillings are nothing to scoff at either. Picadillo, a sort of ground beef with finely-chopped olives and spices is as good as the Argentinian steak (served with chimichurri sauce, the classic pairing).

But there's also a decadent chicken pot pie and a shredded pork belly that is just rich enough, without being overkill. Sides like fried plantains and chips are made in-house, so are their eclectic assortment of homemade sauces. In addition to the aforementioned chimichurri, there's also blackberry hoisin, Sriracha aioli and avocado lime cilantro.

Hernandez said getting creative with her sister is one of the best parts of the job.

"I love working with my family, I've worked with her for three or four other jobs and it's someone that I can trust and rely on, but we know each other very well," she said.
In this week's Extra Course, ABC 7's Steve Dolinsky talks about all of the desserts on the menu at Savory Crust, including something called Nutella poppers.

In this week's Extra Course, ABC 7's Steve Dolinsky talks about all of the desserts on the menu at Savory Crust, including something called Nutella poppers. 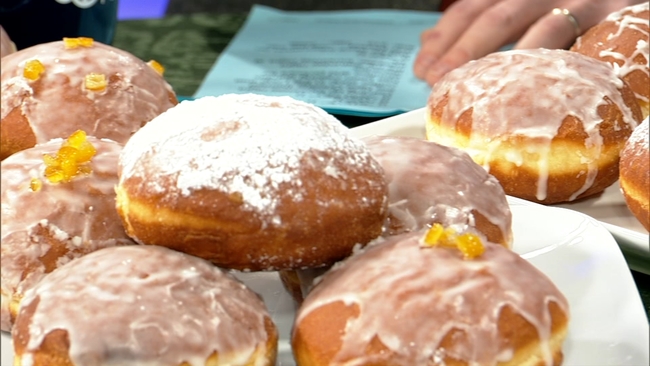