WLS
CHICAGO (WLS) -- The iconic Superdawg fast food restaurant in Chicago is mourning one of its founders, Flaurie Berman, who, along with her husband, started Superdawg 70 years ago.

"It is with profound sadness that we inform you that our matriarch, Florence Berman, passed away peacefully in her sleep last night. For seventy years, Flaurie worked alongside and supported her husband and best friend, Maurie Berman as they built a business and a family," a tweet from Superdawg's Twitter account said.

It is with profound sadness that we inform you that our matriarch, Florence Berman, passed away peacefully in her sleep last night. For seventy years, Flaurie worked alongside and supported her husband and best friend, Maurie Berman as they built a business and a family. pic.twitter.com/Zr5LQ8ZcqR

Florence Berman, 92, who was known as Flaurie, was a 50 percent business partner at Superdawg, located in the city's Norwood Park neighborhood on the Northwest Side, while raising a family and being an active pillar of her community.

She was Superdawg's first carhop and was captain of the carhops throughout the years. She didn't just train them and schedule them, she also mentored them. And just as much as she cared about her employees, she cared deeply about the customer service aspect of the business.

"I don't have adequate words to encapsulate what a remarkable, special person she was and how much I, my family, and the whole city of Chicago will miss her," said her granddaughter Stephanie Drucker, who is an ABC7 digital content producer. "I aspire to be like her in every way and hope that I become even a fraction of the woman she was. ... Anything and everything I did with her was special: lately when we would ride around in the car together she would announce how great it was to be alive, which made me recognize and appreciate the beauty in everything around us."

According to Drucker, her grandmother grew up in a two-flat that her father built in Chicago's Albany Park neighborhood. She came from an entrepreneurial family: her father emigrated from Poland and started a broom business with his brothers, and then they moved into the liquor business.

Flaurie Berman attended Northwestern University and taught school for a few years before Superdawg became a full-time business. It started as a temporary, seasonal gig to supplement the couple's income.

(Left) Florence and Maurie Berman at the Von Steuben High School prom in 1943. (Right) The couple stands outside an Albany Park two-flat.

Flaurie's husband Maurie Berman died in May of 2015. At that time, family and customers remembered the man who added Superdawg to Chicago hot dog lexicon. The restaurant, known for its Maurie and Flaurie mascots atop the building, was Berman's passion, his children said.

"The yellowness of the mustard, the tartness of the relish. If the onions weren't right from one grower, he would get them from a different grower," said Scott Berman, the couple's son.

Maurie and his wife, Flaurie, started the business in 1948, overseeing every detail - from the building design to the food.

When Maurie died, Superdawg, which only closes for three holidays out of the year, closed the day of the funeral. Staffers at Superdawg paid their respects by attending Maurie Berman's funeral wearing their Superdawg golf shirts.

Maurie died at the age of 89, of heart problems.

Almost nothing has changed since the restaurant opened. Even a second restaurant in Wheeling has the same look. 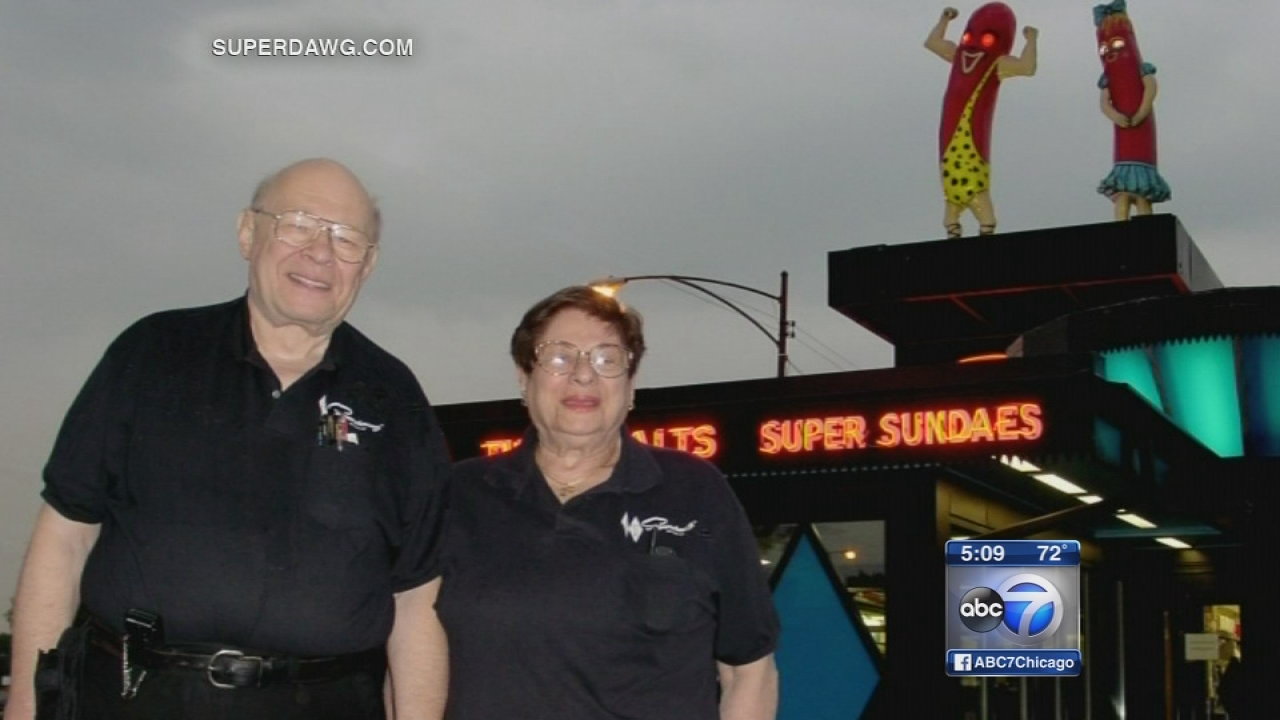