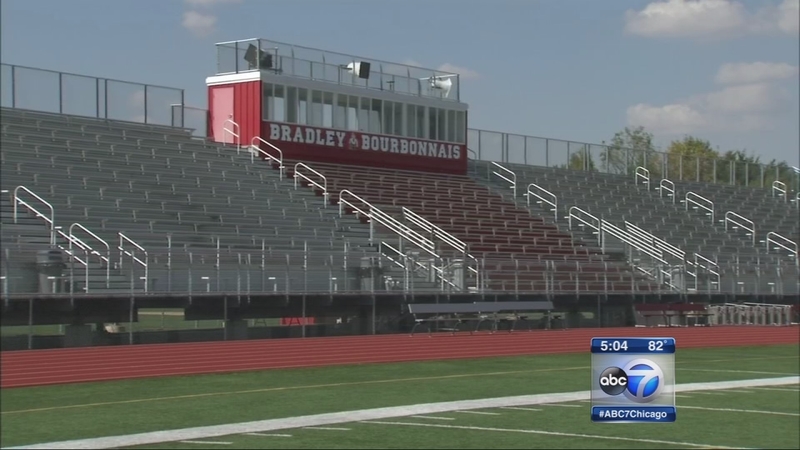 BRADLEY, Ill. (WLS) -- Some suburban high school football players are off the team and suspended from school Monday night after they were seen on video displaying what officials at Bradley-Bourbonnais Community High School are calling inappropriate behavior.

The students could face additional discipline.

When a member of a group of friends had a birthday, he would get his "birthday licks." Last Monday, a sophomore student came to school on his birthday and he asked his friends to videotape what they had planned. When that video surface, school administrators became concerned that other students might be intimidated on their birthdays.

Many students at the school were unaware of the actions of a few last week.

"They are young students and good kids who got wrapped up in something that became a little bigger than what they may have anticipated," said Dr. Scott Wakeley, Bradley-Bourbonnais Community High School.

The school district's superintendent says a video surfaced of a beating last Monday.
He said some sophomores on the junior varsity football team had finished practice and were giving a fellow player his "birthday licks."

"I was disturbed, I was surprised," Dr. Wakeley said.

The superintendent says the video showed seven teens attacking one with hands and belts in the locker room.

As a result, seven sophomores were suspended and kicked off the football team.

"Every place in this building, whether it's a locker room or a hallway or a bathroom, before or after school has to be a safe place and we can't tolerate students being intimidated in anyway," said Dr. Wakeley.

"I think it was handled in the right way. There should be discipline, not just a slap on the hand or whatever. This is serious. Bullying is very, very serious," said grandparent Brenda McLain.

"I feel sorry for the kids that were, whatever happened to them, because that's a life-changing event, something they'll never forget. High school is supposed to be your best years," grandparent Joe Zinanni said.

No criminal charges have been filed, and the students will serve their suspensions and return to school.

The student involved in the videotape was not seriously injured.