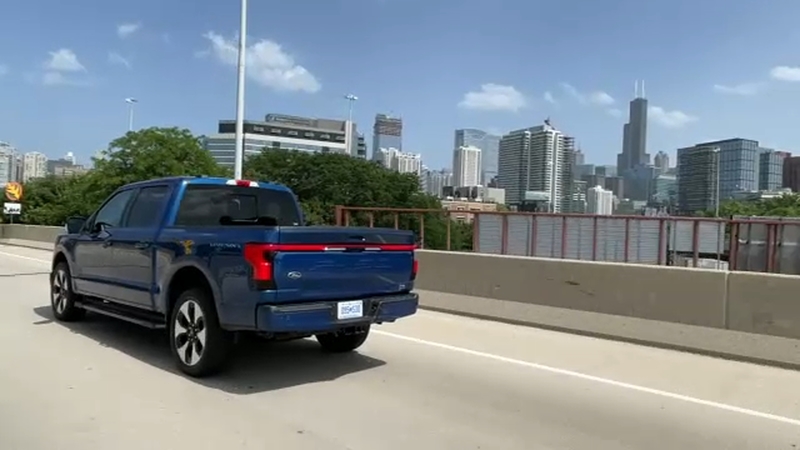 CHICAGO (WLS) -- As gas prices sit at or near record highs, drivers are looking for any way to save a few dollars behind the wheel.

For some, that means going electric.

There's now a new electric vehicle option hitting the road nationwide that is designed with the truck lover in mind.

ABC7's Rob Elgas got to take it for a test drive.

Ford's F150 Lightning is all electric.

We were able to crank the AC and drive America's most popular pick-up truck, all without burning an ounce of gas.

"Electric vehicles are the vehicles of the future and that's why we started with our most iconic names -- the F-150, the Mustang," said Grace Karnes, Ford's business development specialist. "We wanted them to be recognized name plates that people know and love, and really break that barrier to EV entry."

The iconic pickup truck has arrived at dealerships across the Chicago area for people to test drive, but the waitlist for orders is long as Ford ramps up production.

"We had over 200,000 reservations. So right now, we're trying to get through the '22 model year reservations," Karnes said.

Fully charged, its base range is about 270 miles, with an option for an extended range of 320 miles.

We drove the Platinum, which is the highest priced of the fleet at more than $90,000.

"The Lightning actually has a starting price point right around $40,000, which we knew was really important to people, so we want to make it affordable. So that's right around the same price point as the GAS F-150," Karnes said.

During our drive, the truck didn't use much battery. The brakes regenerate energy.

Imagine rush hour and summer traffic in Chicago actually saving you money. There is no fuel being used, ever.

Earlier this year we had a test drive of Rivian's smaller but faster R1T.

Ford's F150 Lightning and Rivian's R1T now lead the charge in the production of EV pickups. GM said its Silverado EV should start production next year, and Tesla's Cybertruck, which has been delayed for years, and is expected to go into production in 2023.

President Biden has set an ambitious goal for half of new car sales to be electric, fuel cell or hybrid electric by 2030. If half of all cars sold by 2030 were electric, EVs could make up between 60-70% of cars on the road by 2050.

The President took the Ford Lightning for a test drive last year in Michigan.

"This sucker's fast," President Biden said when he was behind the wheel.

Like Rivian's truck, you'll be seeing more and more F150 Lightning around Chicago.