Video shows Khan attacking Jeremiah Smith, throwing Lisa Simmons onto police car
WLS
By ABC 7 Chicago Digital Team
CHICAGO (WLS) -- A former Chicago police officer pleaded guilty to battery Thursday in connection with a 2014 incident in which he was seen attacking a man with a baton.

Brett Kahn was sentenced to two years probation after the guilty plea.

The Chicago Police Board voted in April of last year to fire Kahn for a separate excessive force incident that occurred a month before the baton attack.

Kahn surrendered to sheriff's deputies four years ago after being charged with felony aggravated battery and official misconduct stemming from a melee captured on camera in the summer of 2014 in Chicago's North Lawndale neighborhood.

Prosecutors said Kahn hit 32-year-old Jeremiah Smith without provocation while he was on patrol responding to a block party celebrating record deals signed by two neighborhood teens with a major Atlanta label.

"The defendant then struck the victim in the head with the baton so as to either deliver a weighted punch or a blow to the head," prosecutor Theresa Smith said. "The victim suffered bleeding, a knot to the head and experienced throbbing pain as a result of this incident."

A related federal civil rights lawsuit was settled in Smith's favor for $100,000.

Smith's lawyer Rahsaan Gordon said that without video, this day wouldn't have come.

"The video makes it clear that a crime was committed," Gordon said.

Video taken by a bystander - who was also arrested that night - also shows Kahn slamming Lisa Simmons onto a police car and handcuffing her.

"Police officers are given some level of deference. It's a tough city and fighting crime is a tough job," Gordon said.

In his police report, which the Independent Police Review Authority released along with video from the 2014 incident, Kahn wrote that "while on routine patrol in an area known for heavy gang and narcotic activity" he had seen Smith and Simmons drinking in the public way.

Kahn wrote that he used his baton only after Smith tried to punch him. But there is no such punch in the video.

"The victim did not attack, fight with the officers, display any weapons, or commit any other offenses," Theresa Smith said.

Smith later pleaded guilty to a misdemeanor battery charge so he could be released after spending 12 days in jail, according to his lawsuit. That charge was dismissed.

Simmons, who is also a plaintiff in the lawsuit, went to trial. Kahn testified, but the charges against her were dropped, according to the lawsuit.

Kahn's lawyer said he joined the Chicago Police Department in 2012 after a decorated Army career that dated back to 2004.

The video in the player above is from an earlier report.
Report a correction or typo
Related topics:
chicagonorth lawndaleman attackedcaught on videopolice brutalitychicago police departmentcaught on camera
Copyright © 2021 WLS-TV. All Rights Reserved.
CHICAGO POLICE DEPARTMENT 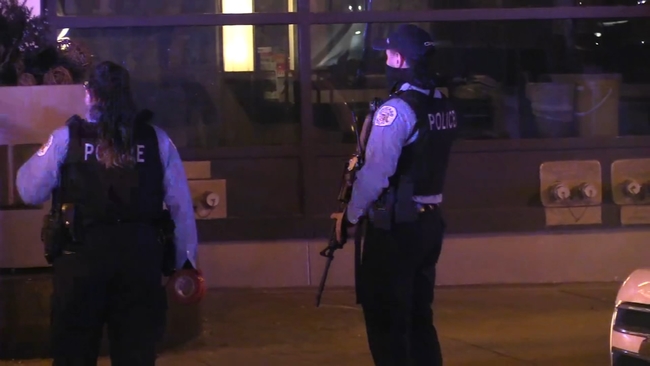 Man stabbed several times during altercation in the Loop