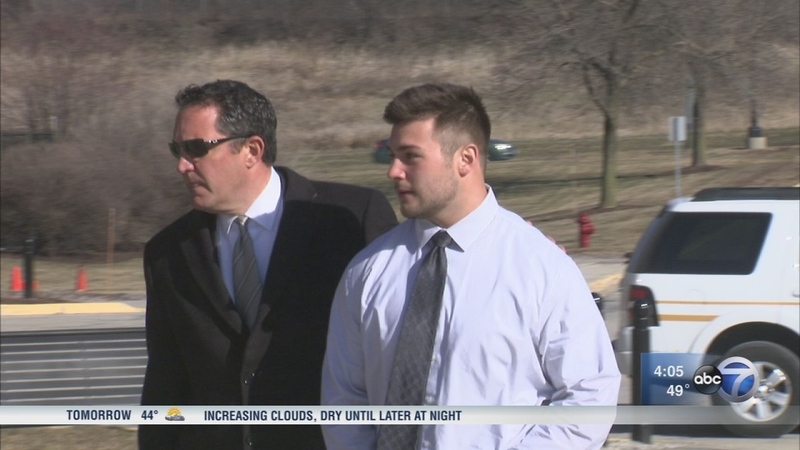 Noah Spielman pleaded guilty to misdemeanor battery, his attorney said. Prosecutors agreed to dismiss all felony counts against the former football player in exchange for his plea.

"What started out as a harmless prank evolved into a two-year ordeal that taught my client a lot of valuable lessons," said Mark Sutter, Spielman's defense attorney.

Spielman, the son of former Ohio State and all-pro linebacker Chris Spielman, appeared in front of a DuPage County judge again Thursday morning. He was sentenced to one year conditional discharge, which is basically probation along with paying a $250 anti-crime fee. He must also complete 100 hours of community service, including 25 hours of talking to youth about the dangers of hazing.

Spielman and four other Wheaton College football players were charged last fall with aggravated battery, mob action and unlawful restraint in connection to a hazing scandal in 2016.

A student who has identified himself as Charles Nagy says the players beat and bound him in his dorm room, then took him to a baseball field, leaving him there partially clothed.

In court, Sutter said that while Spielman accepted responsibility for his actions, he did not cause Nagy bodily harm and only kicked dirt on him after helping carry him to the truck.

"We were able to show them what Noah's involvement was, the person he is," Sutter said.

Spielman's attorneys say because of their client's lack of criminal history and his respective involvement in this incident, prosecutors agreed to this deal. They say he accepts responsibility for the role he played in this.

DuPage County State's Attorney Robert Berlin's office wouldn't comment on the plea dea that doesn't require Spielman to further testify, but in a statement wrote: "This morning, Noah Spielman took responsibility for his actions. I cannot make any further comment at this time."

Last week, Nagy filed a lawsuit last week against the school and all the players except Spielman. He says he had to have surgery from some of his injuries. He also withdrew from the school.