Sun-Times Media Wire
CHICAGO -- Police are asking for the public's help identifying the gunmen who shot eight people, including two teenagers and an 11-year-old boy, on the Fourth of July in Englewood on the South Side.

The FBI is offering a reward of up to $25,000 for information leading to the identification and arrest of the shooters, according to Chicago police. 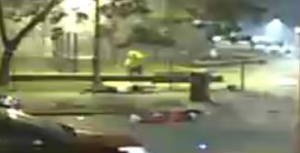 The victims were at a large gathering in the street about 11:35 p.m. in the 6100 block of South Carpenter Street when four males walked up and started shooting, police said. The shooters ran east through Carpenter Park toward Morgan Street.

Vernado Jones, 14, was hit in the back and pronounced dead at Comer Children's Hospital, police and the Cook County medical examiner's office said. Three other men were pronounced dead, two at the scene and one at the University of Chicago Medical Center.

Police released a surveillance image of one of the suspects, seen wearing a yellow hoodie, and are asking anyone with information to call Area One detectives at 312-747-8380 or Detective DeJesus at 773-664-4633.