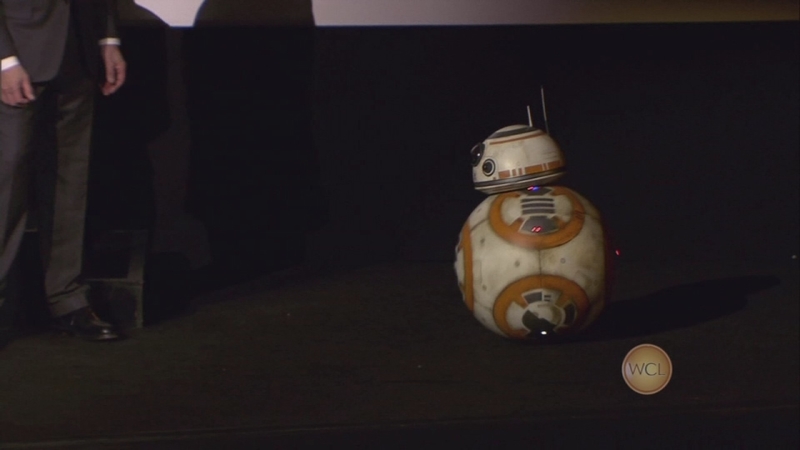 CHICAGO -- The droid that everyone is looking for in the new "Star Wars: The Force Awakens" is BB-8. While his role in the film is not entirely clear (I'm told he may or may not hold the key to finding Luke Skywalker), the droid has definitely captivated us and become one of the hottest selling toys this holiday season.

Did you know there is a celebrity behind all of those cute chirps made by BB-8? Believe it or not, actor and comedian Bill Hader is the man behind the droid. It's not Hader's actual voice. Director JJ Abrams thought that sounded too human, but Hader says he was playing with an app and a "talk box." Hader officially has a credit in the film as "BB-8 Vocal Consultant.)

Her new album, "25," sold more than 5 million albums in the U.S. in the last couple of weeks and she is quite impossible to escape (nor would we want to escape from her). Adele is stealing the spotlight at every turn. She comes to Chicago in July 2016 and her recent "Adele: LIVE in New York City" special had record ratings. However, there were a few things that happened in Radio City Music Hall on November 17th that never made it to television:

Happy Birthday! - Adele sang "Happy Birthday" to a fan sitting in the audience. She met her at a listening session and even knew her by name. Lucky fan!

Curse Words - Adele is known for having a foul tongue and she dropped F-bombs throughout the show. Clearly those would not make the special.

Guitar playing - Adele actually plays guitar and she played "Daydreamer" from her album "19." NBC cut it.

Tribute To Paris - Adele's NYC concert happened just a few days after the horrific attacks in Paris. As she sang her song, "Hometown Glory," the wall behind her transformed into images of Paris and the audience erupted. Watch it at https://www.youtube.com/watch?v=sVQTG_RpsEU.