A Canadian mayor seeking a court injunction that would allow police to "physically" move in and end the blockade.
ABCNews
By Mona Kosar Abdi 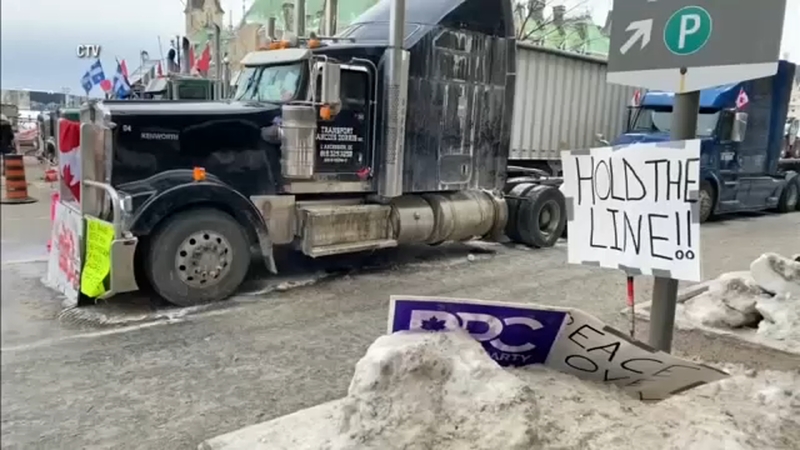 WINDSOR, Ontario -- The hours could be numbered for the massive protest disrupting traffic at the busiest border crossing in North America, as the truck convoy threatens trade between the U.S. and Canada.

The Biden Administration is now urging the Canadian government to use its power and intervene to end the truck blockade along the border.

Car companies are being forced to stop production because they're not getting parts from Canada.

Canada has required truck drivers to be fully vaccinated or face a two-week quarantine period when crossing back into Canada from the US.

Ford said it may have to airlift auto supplies into the country.

In recent days, truckers protesting vaccine mandates in Canada have forced authorities to close the Ambassador Bridge, which links Detroit and Windsor, Ontario - a crucial transit point for moving auto parts and other supplies.

"They are blocking off and choking the economies of both the United States and Canada," said Windsor Mayor Drew Dilkens.

Car companies have been forced to halt or scale back production.

Now, Dilkens is seeking a court injunction that would allow police to "physically" move in and end the blockade.

"If we can't gain compliance, then we bring tow trucks in and many police services to help remove people who are illegally blocking the roadway," the mayor said.

Demonstrators also forced the closure of two other border crossings. One connecting Manitoba and North Dakota, the other between Alberta and Montana.

It comes as demonstrators paralyze Canada's capital as the protests in Ottawa enter a third week.

Thousands of protesters descended in Ottawa again on the weekend, joining a hundred who remained since last weekend.

The blockade at the border is yet another threat to the auto industry, which is already struggling from supply-chain issues and a shortage of semiconductors.