An advocate group has filed suit against the city and Chicago Park District over the proposed location of the George Lucas Museum.

CHICAGO (WLS) -- Advocate group Friends of the Parks filed suit against the city and the Chicago Park District Thursday in an attempt to block the proposed George Lucas Museum from building along Chicago's lakefront.

The museum has strong supporters, including Mayor Rahm Emanuel. But others oppose the planned location of the "Star Wars" mecca along the lakefront between Soldier Field and McCormick Place.

"Chicago has one of the most open, unobstructed shorelines in the world because of the commitment of generations dedicated to keeping it so," said Lauren Moltz of Friends of the Park.

The parks advocacy group said it is not against the space-age edifice, but rather its proposed location, which is slated for construction on two Chicago Park District parking lots just south of Soldier Field. The group has pointed out previously that the Lakefront Protection Ordinance prohibits further private development east of Lake Shore Drive.

"We hope Chicago's leadership and Mr. Lucas will see the advantages of locating the museum on an alternate Chicago site where the building could be a showplace while benefiting a neighborhood in need of economic development," said Cassandra Francis of Friends of the Park.

Lee Bey was on the Lucas task force that recommended the site. A big reason for that recommendation is that as the area is already set aside for museums and can be accessed by the public.

He says the museum would not easily fit in a neighborhood.

"This is the right site, and to be able to turn concrete parking lots that already exist into a world-class museum is a win for the city," Bey said.

The mayor's office issued statement saying in part: "This museum is a generous gift that will expand the rich cultural and educational opportunities for children and families in every neighborhood, and visitors from around the world."

The museum will resemble rolling hills made of stone - an inorganic interpretation of the surrounding landscape - topped by a floating disc. Filmmaker and philanthropist George Lucas had agreed to pay for the museum and its endowment.

Last month, Lucas shared his vision for the museum at Chicago Ideas Week.

"It's in a museum community, which I love the fact that you can relate to the other museums and you can walk from one to the other," Lucas said.

He wants the museum to inspire young people. It would include theaters, collections of narrative art and cinema artifacts - like "Star Wars" props and costumes.

"It's a way of improving the educational experience of children in the city without having to go and try to solve all the problems of every single school," Lucas said. 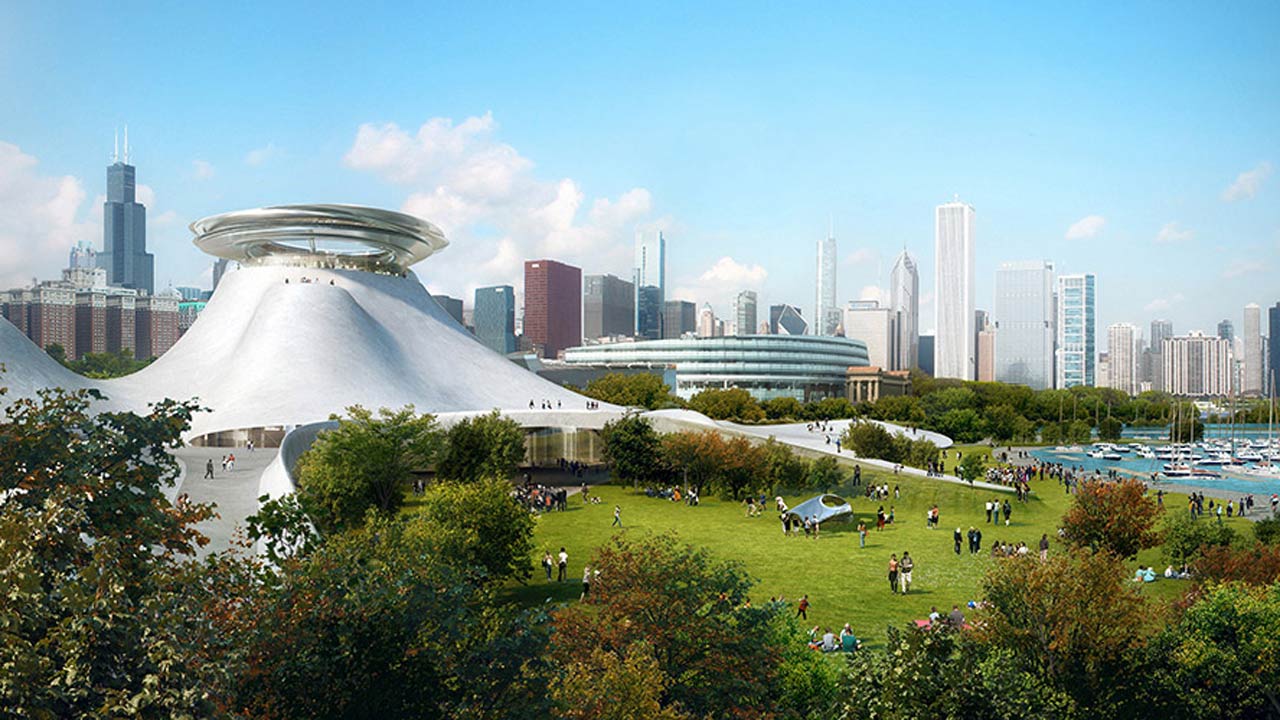