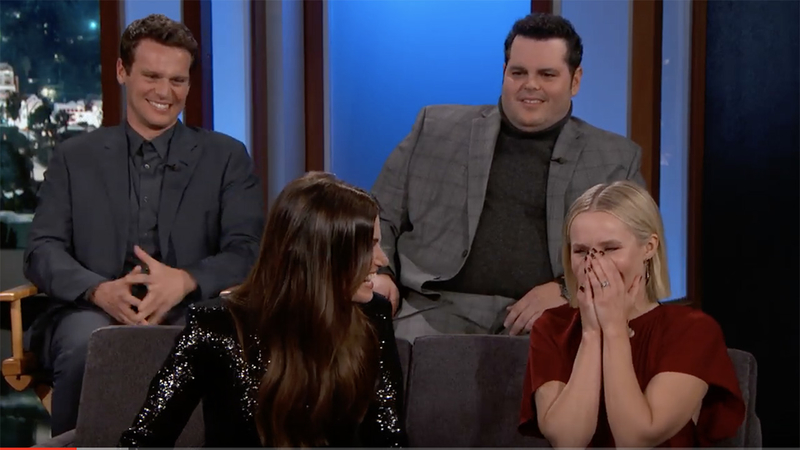 LOS ANGELES -- Two weeks ahead of "Frozen 2's" theatrical release, the cast stopped by "Jimmy Kimmel Live!" and confessed to sharing movie spoilers -- with their kids.

Stars Kristen Bell and Josh Gad, who appeared on Thursday night's show alongside Idina Menzel and Jonathan Groff, admitted that their children know some highly classified information about the sequel to Disney's 2013 box office hit.

Bell, who voices Anna, revealed that, after reading the movie's script, she told her kids the entire plot in an attempt to impress them.

"I told them everything, and I told them, 'Just keep it a secret,' and then it occurred to me: Kids are bad secret keepers, and I might breach my contract," she said.

Gad, who voices Olaf, followed by telling Kimmel that he showed his kids the movie.

"I would put them to bed at night and be like, 'Remember, we don't talk about it," and they're like, 'We know," and I'm like, "Cause, you know, daddy wants you guys to keep having dinner, to be able to sleep with a roof over your head,'" he said.

The cast also talked about wacky "Frozen 2" accessories, Groff's "amazing 80s jam" featured in the movie, and Menzel and Bell getting their stars on the Hollywood Walk of Fame.

"Frozen" is the highest-grossing animated film of all time in the worldwide box office, and already, its sequel broke a record for first-day ticket presales.

"Frozen 2" hits theaters in the United States on Nov. 22.