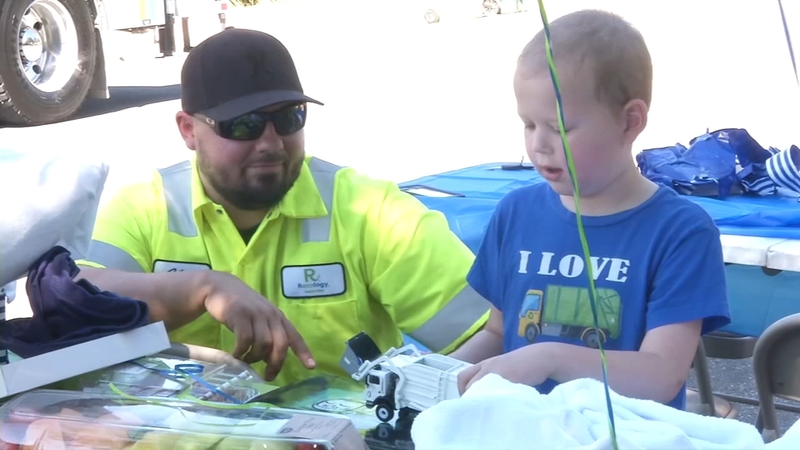 GRIDLEY, Calif. -- A young boy in Gridley, California, got a sweet surprise from his heroes on Wednesday after a cancer diagnosis this summer.

KRCR reports that garbage trucks lined the streets in Gridley Wednesday to surprise the little boy who has looked up to garbage truck drivers as heroes.

"His fascination with garbage trucks has been going on for years... And so anytime we see a garbage truck he gets super excited," said Paul Browning, Parker's father.

His dad says Parker was diagnosed with acute lymphocytic leukemia in July, after screaming in pain that his legs were hurting, before passing out- a nightmare for any parent.

Now they drive to Sacramento every ten days for Parker's treatment.

"It's... I can't even explain because it's just so traumatic and difficult because everyone knows how hard it is to just have medical issues and then dealing with hospitals and money and then insurance it's just... It's never anything that I thought I would see myself at," Browning said.

To relieve some of those costs, his dad has set-up a GoFundMe page.

Some of the money on Parker's GoFundMe goes towards his "Happy Meal fund" to buy his favorite meal of chicken nuggets and fries for the long drive to and from Sacramento for treatment.

His heroes wanted to do something special too, to lift his spirits.

Chris Crum, a garbage truck driver with Recology, met Parker as a kindergartener in May at Durham Elementary School and learned of his garbage truck fascination.

When he found out Parker was diagnosed with cancer, it broke his heart.

"I had such a strong bond with Parker back when he was going to school at Durham that we wanted to put something together to support him because he is a part of our Recology family," said Crum.

Crum even brought along his own son to play with Parker. He says it hits even closer to home knowing it could happen to anyone's kid.

"When I look at my son I think that must be tough on another family," he said.