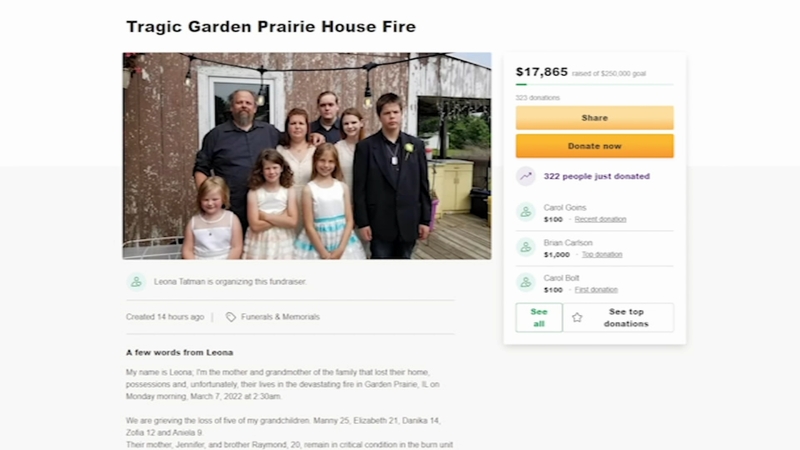 GARDEN PRAIRIE, Ill. (WLS) -- Five relatives, including three children, were killed in an early morning fire at a farmhouse in rural Boone County.

Boone County Fire Protection District #2 Chief Brian Kunce said six others were injured, at least two of them critically, including a sheriff's deputy who suffered a minor hand injury.

The fire was reported to the county sheriff's office at 2:26 a.m. Monday, and deputies arrived about seven minutes later. It took the first firefighters 16 minutes to arrive because of the foul weather and the nearest fire station was unmanned, Kunce said. That's about twice as long as it would take under normal conditions, he said.

When they arrived, Kunce said, the farmhouse was engulfed in flames.

"Fire was blowing out of every window (and) three vehicles were on fire," he said.

Relatives created a GoFundMe to help with funeral costs.

First responders said one brother tried to rescue his siblings from the second floor of the home, but was only able to save his baby niece.

The mother of the five people killed is still in the hospital in critical condition.

The cause of the fire remains under investigation and Kunce said it could be weeks before that is determined.

He said it took dozens of firefighters from several fire departments in Boone County and surrounding counties several hours to extinguish the blaze and remove the bodies from the remains of the house.

Boone County Sheriff David Ernest said an agent for the federal Bureau of Alcohol, Tobacco, Firearms and Explosives Alcohol in the area responded but that there was no indication that explosives or firearms were involved in the fire.

My name is Leona; I'm the mother and grandmother of the family that lost their home, possessions and, unfortunately, their lives in the devastating fire in Garden Prairie, IL on Monday morning, March 7, 2022 at 2:30am.

Their mother, Jennifer, and brother Raymond, 20, remain in critical condition in the burn unit of a local hospital.

Manny, the oldest of seven children, was a great brother. He was employed at a local manufacturing company that produces insulated bags.

Elizabeth (Lizzie), was a new mother who was recently accepted into a local nursing program and was prepared to start classes in the fall.

Her daughter Katalyna, was rescued from the home by her younger brother Raymond.Danika wanted to be a gymnast. She was in the 8th grade and was looking forward to going to high school in the fall.

Zofia wanted to be a baker. She loved going to Grandma's and doing all of the cookie, cake and any other baking she could get her hands on. She was in the 7th grade.

Aniela was in the 3rd grade and wanted to be an actress. So she would dress up in costumes and put on shows for family and friends.

Their brother Raymond tried to rescue his siblings from the second floor of the home, but was only able to save his baby niece.

Their mother Jennifer, is a stay-at-home mother who passionately loved her kids and farmette. She had goats, pigs and chickens, of which most also perished.

Lloyd, the father of the children and Jaime, the boyfriend of Elizabeth have been released from the hospital.

Aside from the irreplaceable loss of their children and siblings, the surviving family members have lost everything. The home they lived in and loved, the memories, pictures and every single possession they owned, including their automobiles.

We thank the surrounding firefighters, EMTs, law enforcement officers and all other first responders for coming to our rescue.

This is a catastrophic event for our family to lose five members at one time.