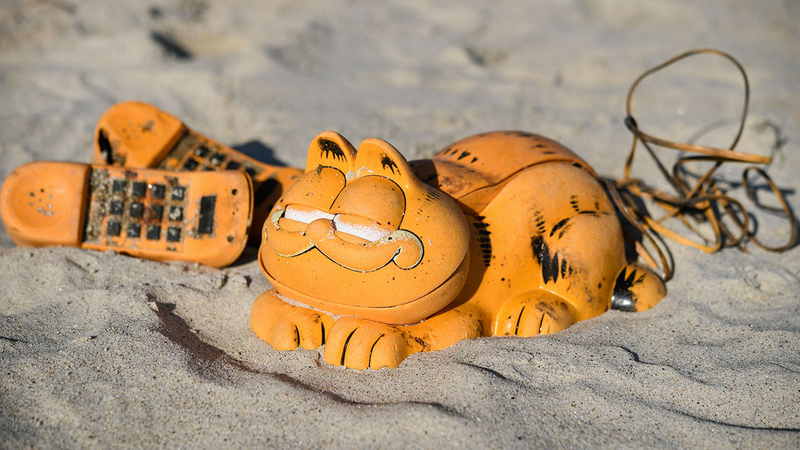 Why orange Garfield telephones washed up on French coast for decades

Divers from Ar Viltansou, a conservation group in Brittany, recently located the remains of a shipping container that presumably carried a load of the novelty telephones, confirming the long-held suspicions of coastal residents.

A diver who first found the container not long after it apparently fell into the ocean in the 1980s directed conservationists to the wreckage. Ar Viltansou head Claire Simonin told the AFP news agency that the container was wedged in a cave and could only be accessed during low tide.

"We found this incredible fissure that is 30 meters deep and at the very bottom, there were the remains of a container," Simonin told the AFP. "Under the boulders in front of the entrance, we found 23 complete handsets with electronics and wires. They were everywhere."

The circumstances surrounding the shipping container's journey to the bottom of the ocean are still unclear, though the diver who originally found the container said he located it after a severe storm hit the area. Environmentalists warned that the scores of plastic phones that have survived decades of ocean currents are just one example of the threat that resilient plastic pollution poses to marine ecosystems.
Report a correction or typo
Related topics:
societybizarrepollutionhistoryoceansu.s. & worldfranceplasticplastic pollution
Copyright © 2022 WLS-TV. All Rights Reserved.
U.S. & WORLD
Judge: COVID-19 asylum restrictions must continue on US-Mexico border
IN man pleads guilty to being in US Capitol during Jan 6 insurrection
Could remains in shrinking Lake Mead be tied to Chicago mob?
Trump pays $110K fine, but must submit paperwork to end contempt
TOP STORIES
Security guard shoots man in buttocks at Millennium Park
Chicago mass shooting victim ID'd as father of 2, with twins on way
9 shot, 2 fatally, on Near North Side
Postal police say they are sidelined during time of heightened crime
New hotline aims to help those struggling with opioid, substance abuse
Officer relieved of powers after teen carjacking suspect shot: CPD
Chicago Weather: Occasional showers, thunder Saturday
Show More
United cancels couple's flight, charges $4K more for same seats
Teen charged with killing man after kicking him in head in CTA attack
Great Lakes Piping Plover chick Imani spotted in Minnesota
Doja Cat drops out of Lollapalooza due to throat trouble
Legendary Cubs pitcher 'Fergie' Jenkins immortalized with statue
More TOP STORIES News