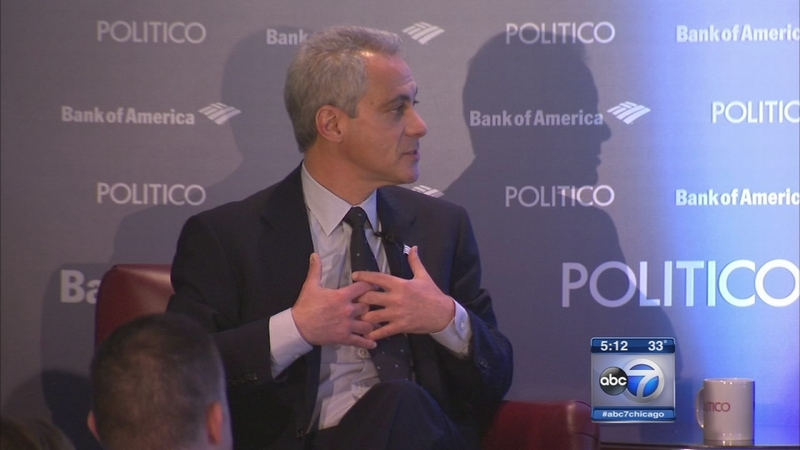 Mayor Emanuel says he will not resign

Protestors are claiming credit for forcing McCarthy's departure, but they're not done yet. Many say the mayor should be the next to go.

"Chicago is now a laughing stock and an embarrassment because of what's happened on the 5th floor," said Rev. Gregory Livingston, Coalition for a New Chicago.

Emanuel says he has no intention of resigning, but he insists he is committed to repairing the rift between his administration and the community.

"We have a process. It's called the election. The voters spoke," Emanuel said. "I'll be held accountable and responsible for my actions and the decisions I make and that's how I approach it. I never shrink from the responsibility of making what I think are the very tough decisions to move the city forward."

Mayor Emanuel spoke candidly during a Politico event on Wednesday morning, where he said he's committed to mending the rift between his administration and the community. He announced Wednesday that he will not attend the climate change conference in Paris as he had planned. Instead, he's staying home to speak with people at churches, stores and restaurants.

Emanuel was questioned about the city's handling of the McDonald video, which shows a Chicago police officer shooting the teenager 16 times as he walked away. He also said Attorney General Lisa Madigan's call for a Department of Justice investigation of the police department is unnecessary.

"There are enough allegations that demonstrate that the system is not working, or people believe it is not working. And so we absolutely, I think for all the people of the city of Chicago, we need somebody who has expertise in doing these exact type of investigations," Madigan said.

White House Press Secretary Josh Earnest says President Obama is following the news in his hometown and the pressure being applied to his former chief of staff.

"I don't know that he's had the opportunity to speak to Mayor Emanuel in the last week," Earnest said. "I can tell you that what we did see from Mayor Emanuel in the news conference that he held yesterday was a personal commitment to follow through on reforms that he believes are needed within the Chicago Police Department."

There are also more calls for Cook County State's Attorney Anita Alvarez to step down- and not just from those angry over the McDonald case.

The families of two men killed in a 2007 crash involving a Chicago police officer are planning a sit-in on Thursday. They say the officer was drunk. A judge ruled there wasn't enough evidence to take the case to trial.

The city has begun its search for a new Chicago police superintendent. Until McCarthy's replacement is found, Chicago First Deputy John Escalante, a 29-year veteran, will serve as interim superintendent.

While some celebrated the shakeup at the Chicago Police Department, others spoke about the department's future. Retired Police Officer Richard Wooten wants Emanuel to hire an African American.

But many think Mayor Rahm Emanuel will seek an outsider. Soon-to-retire Philadelphia Police Chief Charles Ramsey has been a candidate in previous searches.

"No one's contacted me. I hate to see Garry McCarthy step down. He's a good man. I think he's done a lot of very good things in Chicago. I still plan to retire in January. If there are ways of helping organizations beyond just leading it, in terms of being police superintendent or something. But I've not heard anything from Chicago at all," Ramsey said.

Some experts believe an African American superintendent is critical to restoring trust in the community.

Emanuel said the superintendent candidate the city is looking for has no type. He's looking for a professional who can lead and who has a solid record of bringing results in public safety.

The police board will narrow the list to 10 candidates, then to three, and then the mayor will make his decision.