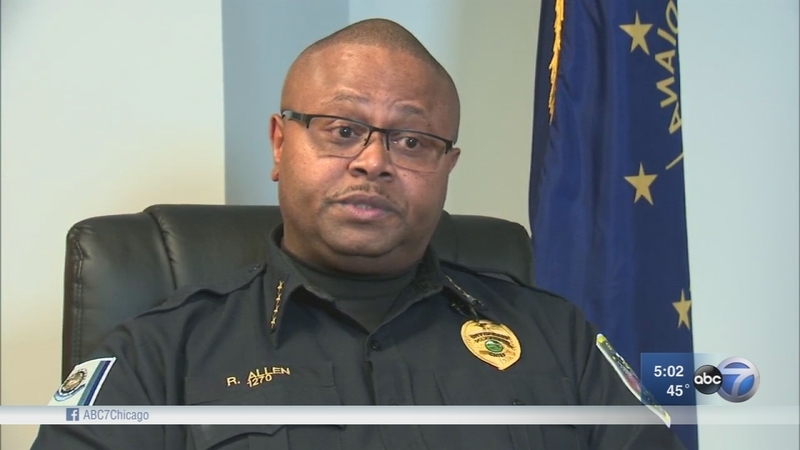 GARY, Ind. (WLS) -- A program called Gary for Life is aiming to stop bloodshed in the northwest Indiana city by offering gang members a choice.

"We have to lower the amount of violence that we have in our community. We are nine weeks into the new year and we have already had nine homicides," said Joy Holliday, the program manager for Gary For Life.

The program includes quarterly call-ins where they bring in known gang members who are on parole or probation and offer them resources to change course. The most recent call-in happened Wednesday night.

"This call-in that we had Wednesday was my first as chief of police and I did observe that they were very attentive," Gary Police Chief Richard Allen said.

Allen, who took over as chief last month, said he has tough words for those who don't take his advice.

"If the violence continues, we will focus on you and focus intently on the groups that you are involved in," he said.

Gary for Life is in its third year and it's modeled after a program in New Orleans. It's funded by private donors and grants.

"Safety is a concern of everyone from businesses, to schools, to foundations, to the everyday citizen. Safety is something that's universal," Holliday said.

They say the program is getting results.

"I think success is not necessarily measured in numbers but by the outcome, the response you get from the community, by having someone in the community say it's safer or having one of the young people that's involved in the program say 'Hey. Thank you for what you have done, I have had the opportunity to turn my life around,'" Allen said.
Report a correction or typo
Related topics:
garycrime preventiongang
Copyright © 2022 WLS-TV. All Rights Reserved.
TOP STORIES
Man, 19, charged in Lincoln Park Chicago shooting, robbery: CPD
In Buffalo, Biden condemns racism, mourns victims
Chicago curfew hours criticized after shooting at 'Bean'
You can now order 3rd round of free at-home COVID-19 tests
Student, 7, injured after gun goes off at Disney Magnet School
Park Ridge mom starts group to help families find baby formula
Warwick Allerton Chicago shooting deemed murder-suicide: source
Show More
Man, 18, charged in boy's North Chicago shooting death
Amber Heard cross-examined about fights with Johnny Depp
CTA crime likely thwarted after man arrested; gun recovered: CPD
House panel holds public hearing on UFOs
FDA authorizes Pfizer COVID-19 booster shots for children ages 5 to 11
More TOP STORIES News