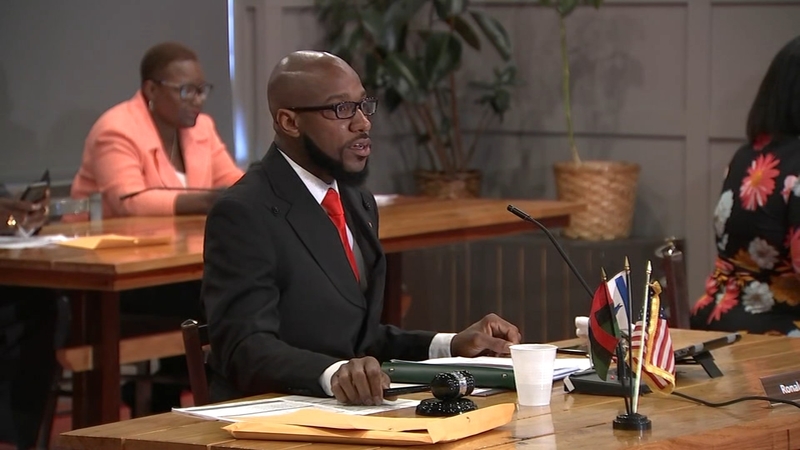 EAST CHICAGO, Ind. (WLS) -- The first Gary city council meeting since council president Ron Brewer was arrested for allegedly firing a gun at two teenagers who allegedly stole his car, and allegedly kidnapping one of them, was held Tuesday evening.

Brewer chaired the meeting and spoke about his arrest.

"We depend on our justice system to be fair, and I stand firmly and maintain my innocence," he said.

911 calls of the incident on September 22 have been released.

"My car was stolen yesterday in Gary," Brewer says on the recordings. "It's in East Chicago now. We just rolled past the two gentlemen here."

Brewer stays on the line as he and his wife follow their stolen Lexus sedan. Police said Brewer fired shots at the vehicle.

The pursuit ends at an East Chicago gas station where Brewer detained a 14-year-old boy.

"Hey, let's go!" Brewer is heard saying to the teen on the tape.

"I do not know them," the teen replies.

"I'm not even from out here," the teen said.

They argued for several minutes as Brewer drove the teen to Gary.

"What did I do?" the teen says at one point. "I didn't steal nothing. I don't know how to drive!"

"As an elected official, I would never intentionally bring shame to my community," Brewer said at the meeting Tuesday evening.

The 911 calls from Gary City Council President Ron Brewer have been released. Brewer is accused of kidnapping a teenager, and said the teenager stole his car and he was holding him

"You ain't going nowhere with your (expletive) mama," Brewer says at another point in the call. "You're going (unintelligible) in a (expletive) body bag. That's what you're going to do."

A gas station employee also called 911 after Brewer and his wife allegedly confronted the teens.

"There's a customer here stating that two young men stole her husband's car," the attendant tells the dispatcher. "And it was, like, starting to get pretty serious so I was wondering if you could send an officer with, like, quickness?"

Police said they are pursuing several charges against Brewer, including kidnapping, criminal recklessness and intimidation. East Chicago police say Brewer fired a gun at two teens he suspected of stealing his car, and said he kidnapped one of them.