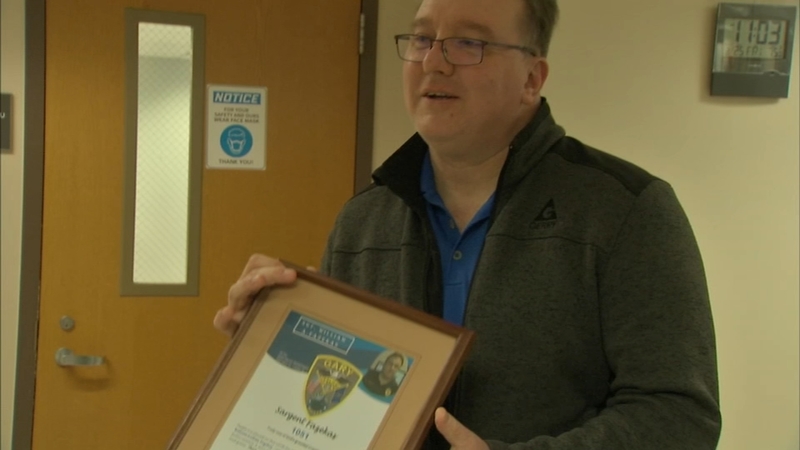 GARY, Ind. (WLS) -- The Gary police sergeant who was badly injured after being shot in the line of duty visited his station Friday as he recovers from surgery for his injuries.

This is only the second time Bill Fazekas has returned to his station since being shot, and he was given letters and gifts, some from colleagues and others from strangers.

Two and a half weeks ago Fazekas was on his way to the station when he saw a driver nearly hit a woman.

"She had to dive to avoid being hit," he said.

When he tried to pull over the driver, he came under fire.

"The amount of fire power that was brought upon me, it was like I was in a war," Sgt. Fazekas said.

More than 40 rounds were fired, and one shattered his left shoulder. He was losing a lot of blood; while Officer Gutierrez engaged the suspect, Officer Briggs made a life-saving tourniquet.

"He turned with the pressure and said, I still remember the words, 'I'm going to drag you like a puppy dog to keep the pressure on you,' and it worked," the sergeant recalled. "It's is emotional, but it's getting better and it's a great part of the healing, seeing these guys."

With 14 screws in his shoulder and physical therapy ahead, he plans to return in four to six months as his retirement date is still three years away.

"Something or somebody is not going to run me out of this place, I'm going on my terms," Fazekas said.