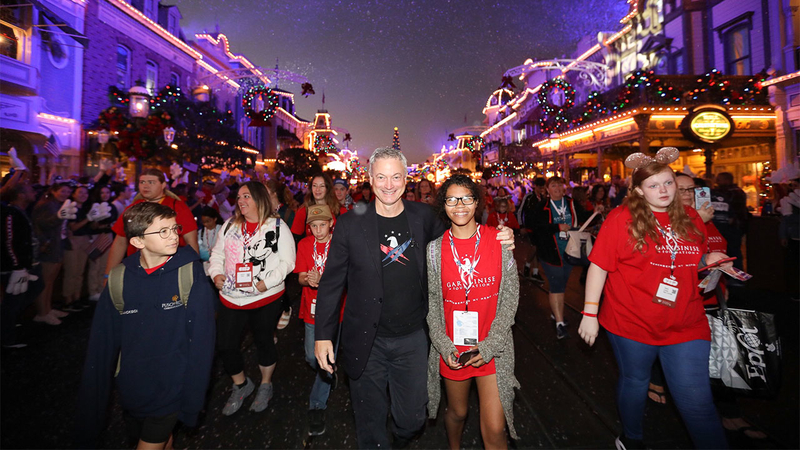 ORLANDO -- More than 1,700 family members of fallen service members are getting the support services they deserve -- as well as a trip to Walt Disney World -- thanks to Gary Sinise.

Sinise, through his namesake foundation, partnered with American Airlines to give the gold star families a five-day "healing retreat" at Disney as part of a charitable program known as the Snowball Express. In addition to time in the theme parks, those participating in the trip will also be offered counseling and other financial, medical and educational support services.

"We want them to know that they're appreciated and loved. We want them to feel the spirit of Snowball, which is healing, hope, happiness, and joy," Sinise said. "That's what this whole thing is about: making sure these children know that we do not forget what they are going through."

Gary Sinise Foundation Snowball Express families were celebrated this morning at Walt Disney World Resort in Orlando, FL whose cast members put on quite a show with fireworks, snow, and more as families paraded down Main Street U.S.A. to the Magic Castle. #GSFSBE #SnowballExpress pic.twitter.com/wLwZM1I6UX

American Airlines donated 13 charter flights with volunteer crews to help get the families to Orlando for the event.

The Gary Sinise Foundation explained the program's origins: "The annual Snowball Express event began in 2006 with a letter written by a fallen Soldier to his wife, only to be opened should he perish in battle. While the letter expressed many things, one wish was that they visit Disneyland. From that letter, Snowball Express was created to bring together the children and surviving spouses of fallen U.S. military heroes for a healing retreat."