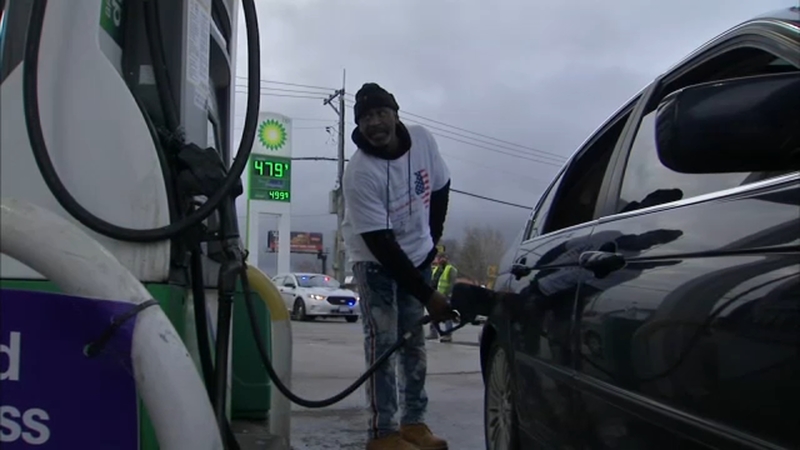 CHICAGO (WLS) -- This election cycle is shaping up to see a lot of politics at the pump as the mayor and governor both face pushback over efforts to help ease the pain of high gasoline prices.

A watchdog group said they both deserve scrutiny with both measures under fire as election-year gimmicks.

Lightfoot's plan to give away more than $12 million in free gas cards narrowly passed out of a city council committee 15-12, but not without some scrutiny.

High gas prices are still causing a lot of pain at the pump even though prices have dropped a bit in recent days. The mayor's plan to give away free gas cards with her name on them is raising eyebrows.

"First and foremost, there's the rendering of the card, that displays Mayor Lightfoot's name very prominently, it's no secret that in just a few months we're going to have to begin campaigning and face the voters," said Ald. Carlos Ramirez-Rosa, 35th Ward.

RELATED: CPI inflation hits 40-year high; how you can save money on essential items

"The optics of putting Mayor Lori Lightfoot's name on these cards is not good. It makes it appear that this is politically motivated," added David Greising, president Better Government Association.

The mayor defended her plan, which will now distribute 75% of the gift cards in mobility hardship zones on the South and West sides.

"There is an urgent need and we're being responsive to the news that we see across the city," Lightfoot said Tuesday.

The mayor is widely expected to run for re-election, but she has not made an official announcement.

Barely a week after announcing he was running for mayor, Willie Wilson announced a third gas giveaway this Saturday.

"This is not a political thing," Wilson said on Tuesday.

Wilson said he just doing what he's been doing for 25 years -- helping people.

"But now that he's a candidate, he raises questions about the motivation in a way that previously people didn't really raise that issue," Greising said.

Governor Pritzker, who signed a budget into law Tuesday that includes a temporary suspension of a gas tax hike, also facing criticism, with republicans calling it a shameless political stunt.

The Illinois Fuel and Retail Association, which represents about 5,000 gas stations around the state, also said it will sue because the law requires them to place placards at each pump notifying motorists of the suspended tax increase, which they claim amounts to forced speech.

"And that is what's really unfortunate is the government really forcing private business to advertise on the Democrats behalf in this case," said State Senator Dan McConchie, Senate Republican Leader.

The BGA said in an election year, things get complicated.

"Yes, there's relief that is happening. It is small. There are politics involved. There also is public benefit involved," Greising said.

Governor Pritzker has defended suspending the gas tax hike as an important way to help people. One of the big concerns about the law is that gas stations that don't comply with the placard requirement face fines of $500 a day. The lawsuit challenging it is in the works.