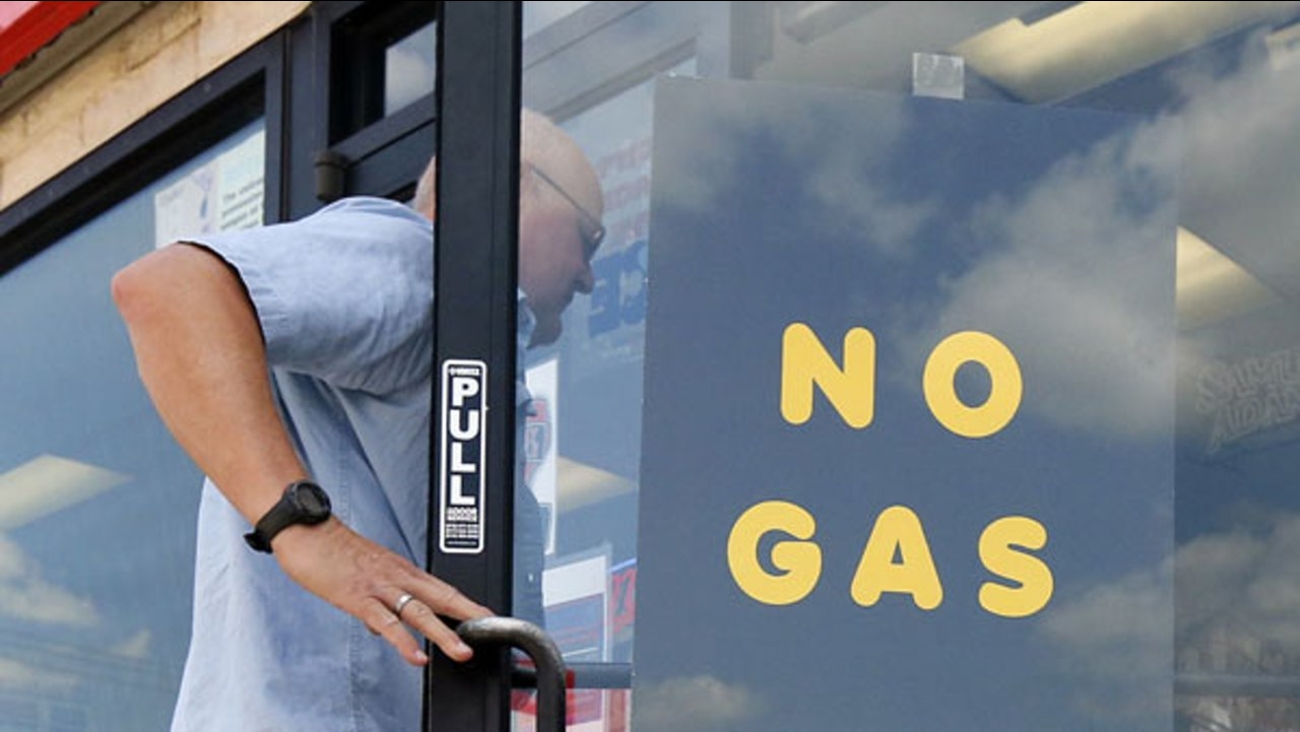 A customer walks into an Exxon filling station and convenience store location where a sign on the door reads, "No Gas," Thursday, Aug. 31, 2017, in Bedford, Texas. (AP Photo/Tony Gutierrez)

ATLANTA -- Gasoline prices rose several cents overnight amid continuing fears of shortages in Texas and other states in the aftermath of Hurricane Harvey's strike on the Gulf Coast.

The national average for a gallon of regular gas rose in one day from $2.45 Thursday to $2.52 Friday, the American Automobile Association reported .

At least two major pipelines - one that ships gasoline across the southern United States and to New York, and another that flows north to Chicago - have been slowed or stopped because of flooding and damage.

The average price of a gallon of gas had soared by at least .10 cents in eight states since Thursday: South Carolina, Ohio, Delaware, Maryland, Georgia, North Carolina, Virginia and Texas.

Among those states, the highest 24-hour rise on average was in South Carolina, AAA reported. It's among several southern states that are heavily reliant on the Colonial Pipeline for deliveries of gasoline.

Part of the pipeline that runs through Texas is shut down and inspections must be done before the entire system can be fully operational again, Colonial Pipeline spokesman Steve Baker said Thursday. The Georgia-based company remains able to operate its pipeline from Louisiana to states east and northeast of there, though deliveries will be "intermittent," the company said. It hopes to return more sections of the pipeline to service by Sunday.

In Dallas, drivers lined up at gas pumps Thursday as some stations ran out of fuel.

One Chevron station in downtown Dallas that sold regular gas for $2.29 a gallon just before the storm was charging $2.99 Thursday. Others charged well over $3, and one downtown Shell station charged $3.97 for a regular gallon of gas.

The crunch prompted QuikTrip, one of the nation's largest convenience store chains, to temporarily halt gasoline sales at about half its 135 stores in the Dallas-Fort Worth area. Instead, gasoline deliveries are going to designated stores across all parts of the metro area, QuikTrip spokesman Mike Thornbrugh said.

Analysts are cautioning drivers not to panic as some gas stations run low on gasoline.

If people start hoarding gas, as some have in Texas, "that's going to make the problem worse, and prices shoot higher and the event will last longer, with more disruption and shortages," said Patrick DeHaan, an analyst with GasBuddy.com.