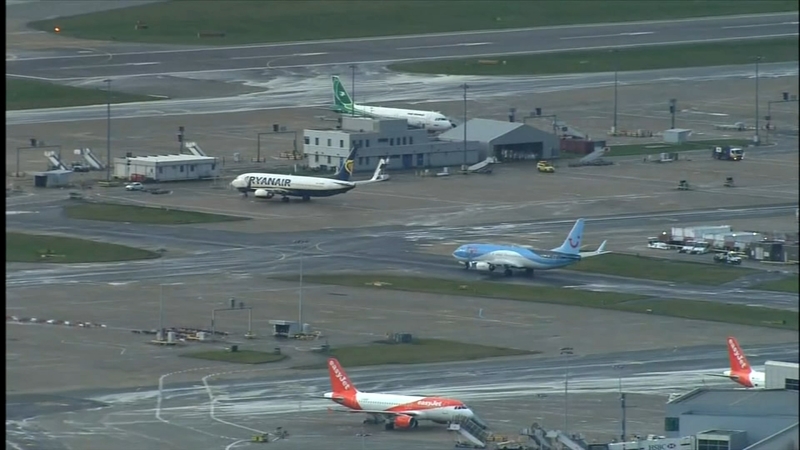 LONDON -- British police on Sunday freed two people who been arrested in connection with the drone incursions at London's Gatwick Airport, saying they were no longer suspects. The move left the public with no answers about who had disrupted the holiday travel plans of tens of thousands of people.

Sussex police said Sunday that a 47-year-old man and a 54-year-old woman who were arrested late Friday had cooperated with police. They both live in Crawley, a town that is a five-minute drive from Gatwick, Britain's second-busiest airport.

Flights to and from Gatwick were operating normally Sunday on a heavy day for airline travel, airport authorities reported.

Days of disruptions at Gatwick began Wednesday night when drones were seen over the airfield. Airport authorities consider drones a menace because they could damage a plane in flight or be sucked into a plane's engine, causing a deadly crash.

Police say Gatwick Airport has offered a 50,000 pound ($63,000) reward through Crimestoppers for information leading to the arrest and conviction of the fugitive drone operators.

The release of the two people from Crawley means the culprit or culprits behind the drone invasions are still at large. Police say the motive for the drone incursion is not yet known but they do not believe it is "terror-related."

"We ask for the public's continued support by reporting anything suspicious, contacting us with any information in relation to the drone incidents at Gatwick," he said.

Tingley said police did not identify the suspects but The Mail on Sunday named them and published a front-page photo of them with the headline, "Are These the Morons Who Ruined Christmas?"

British military personnel and equipment are now being deployed at Gatwick, which handles 43 million passengers a year, to buttress police in an effort to deter drone use and to react quickly if another drone is spotted.