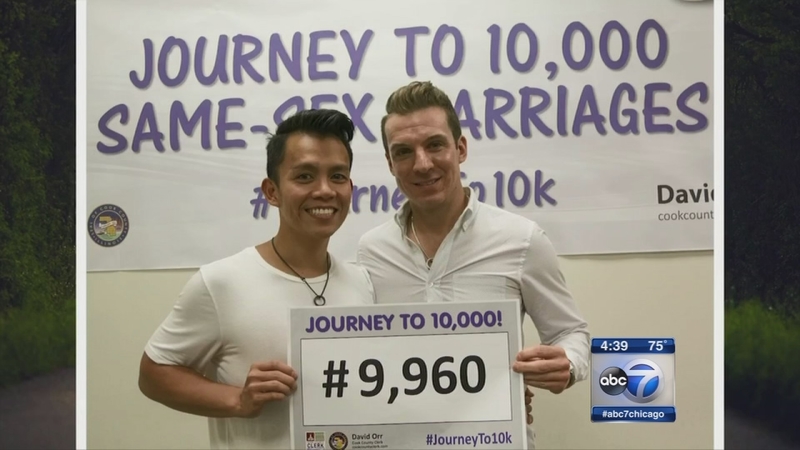 CHICAGO (WLS) -- The Cook County Clerk's Office expects to issue its 10,000th marriage license to a same-sex couple this week.

On Monday, the office was 10 marriage licenses away from the milestone.

"I agree with everyone that it's going to soon become a number that nobody pays attention to at all," said Pat Ewart, who became part of the first same-sex couple legally married in Illinois when she wed Vernita Gray. Their marriage came after the state Legislature approved a gay marriage law in late 2013.

The couple won their legal challenge to get married sooner than later because Gray was suffering from terminal cancer.

"I know that Vernita is looking down and smiling right now," Ewart said. "I'm guessing she's doing a little dance too."
Since then, same-sex couples have come to Cook County from other parts of the state, as well as other parts of the country, to apply for marriage licenses.

Some couples are featured in a video produced by the clerk's office called the "Journey to 10,000."

"Our same-sex couples were generally much older for obvious reasons, people who loved each other for years couldn't," said Cook County Clerk David Orr.

That was the case for James Darby and Patrick Bova, who were among the first to get a marriage license.

"It legitimizes and makes it clear to everybody that we've been together for 52 years," Bova said. "It's been a long engagement. We probably should get married."

Getting married is what Lee Edwards and Brenda Lee had hoped for when they met 13 years ago.

"Just being recognized and having equality that everyone else had privy to as married couples," Lee said.